Statik Selektah - What Goes Around... 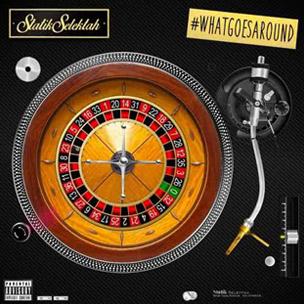 It begins, as so many of his tracks do, with a drop. The provocative-sounding female voice is laced with connotations of Jazz and Soul samples, DJ Premier-esque scratched choruses and the kind of kick drum, snare and high hat combinations reminiscent of a time when A Tribe Called Quest was fresh on the scene. As Hip Hop has gone through phases like “ringtone Rap” and “Drill,” Statik Selektah’s Golden Age-infused style has remained unchanged, influencing a new generation of emcees who have revitalized the boom bap sound.

Over a lengthy 20 tracks, the veteran enlists both Hip Hop legends like De La Soul and Snoop Dogg, to newcomers and frequent collaborators Action Bronson and Joey Bada$$, creating an album that serves as a crash course in today’s youth movement combined with the prodigious sampling and, at times, delightful improvisation that adds a certain nostalgia without descending into a straight-up homage. And while last year’s offering, Extended Play—released on a day in June most remember for the release of Yeezus, Born Sinner and Watching Movies with the Sound Off—was notable for its Gospel samples, Statik Selektah’s latest, What Goes Around… draws heavily upon Jazz, one of Hip Hop’s closest sampling companions.

It starts off with a bang. Blaring horns, heavy hitting drums and the kind of energy most reserve for when they unexpectedly hear M.O.P.’s “Ante Up.” Even without his partner in rhyme Billy Danze, Lil Fame, a member of the aforementioned ‘90s duo, takes the reins on the title track, serving as the album’s hype man by laying down a passionate verse that “explodes like Mentos in a Pepsi.”

Those looking for a less aggressive beat will be more comfortable with the album’s second track, “Carry On,” which features a lyrical dual between Brooklyn-native Joey Bada$$ and ESGN’s own Freddie Gibbs. The hard snare hit and thumping bass, both signifiers of underground-style beats, is a constant between the two distinct tracks, a trick employed often by Statik Selektah throughout his latest project. It’s this connection that makes What Goes Around such an enjoyable album to listen to.

“The Thrill Is Back,” driven by shifting piano chords and the rhymes of Styles P and Talib Kweli, is another testament to the versatility found on What Goes Around… Once again, Statik Selektah manages to craft a beat perfectly suited to the styles of the track’s chosen emcees, creating a common ground between the hard-nosed member of The Lox and the intellectual Brooklyn rapper, who begins his verse with an homage to the Notorious B.I.G. This track also offers us our first true taste of Selektah’s scratching abilities, which come at both the beginning and end of the song.

Shifting away from Bronsalino’s bravado, “All The Way” allows Snoop Dogg to add his pimpish falsetto to the mix. It is here, along with tracks like “My Time,” featuring rappers Black Dave and Xantus along with Pro Era members CJ Fly and Nyck Caution; “Slum Villain,” featuring Joey Bada$$, and “God Knows,” featuring UGK’s torch bearer Bun B, crooner Jared Evan and Posdnuos of De La Soul, where the influence of Jazz is most openly apparent. It also becomes a bit stagnant, as the Jazz riffs blend seamlessly into the voices of the combatants, sometimes overpowering their flows. At times, as on “Chopper,” the looping saxaphone feels forced and redundant. As you move through the 20-track behemoth, you can’t help but think the sound is crossing the line between being consistent and homogenous,  but it’s also this firm adherence to a particular aesthetic that is the albums blessing and curse.

If Extended Play was Statik Selektah’s way of stating that he could compete with Hip Hop’s best, What Goes Around… is his way of letting the world know that Hip Hop’s Golden Age is alive and well. And while the compilation deejay/producer album tends to have it’s share of woes as too many cooks spoil the broth, Statik Selektah balances out this tendency with solid production that invokes images of the days of Hip Hop yore.