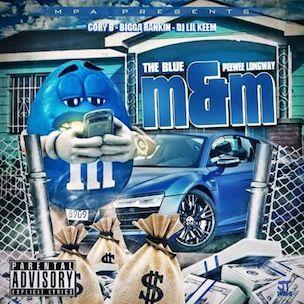 PeeWee Longway could be a more than capable Big Boi-like grounding influence for Young Thug’s weirdly malleable croon in a duo. He could be a great many things, but it’s safe to say he’s satisfied with just rapping. After all, if we are to believe Metro Boomin, Rap is basically just his hobby, something he stumbled into after Future’s childhood friend, Young Scooter, told him where to buy beats. His seemingly abrupt decision to delve into the profession was about as casual as picking up scrapbooking: “Man, I’m about to start trying this rap shit,” he told the upstart ATL producer, and try he has. So far, he’s proven to be a natural talent… If he applies himself, that is. So, The Blue M&M finds him still working out the kinks, and at times the music is impeded by his own stylistic sashaying as he painstakingly decides what exactly he wants to be.

The Blue M&M is more or less a sonic workshop disguised as a standard Trap release. Sure, there is production from Zaytoven, Dun Deal, and Honorable C-Note, and there are cameos from the usual suspects (Migos, Young Thug, Jose Guapo, etc.), but underneath all of that lies an emerging young talent exploring his sound, which is in its infancy. Songs like “Energy Kit”—which harps on the importance of the maternal bond over sensual C4 synth piano riffs that would be right at home on a Trey Songz ballad—are evidence of the experimental nature of the tape. PeeWee tinkers with various methods of craftsmanship in an effort to patent his own design in a cramped subgenre overrun with overlapping gimmicky styles. On his debut, PeeWee Longway is searching for his voice, but—hobby or not—he is already etching out his place in Trap lore on talent alone. In the moments when he’s diligent and in tune with his craft, like on “Blue Benjamin,” he is bewitching: “Sorry we passin’ gas / Switcharoo while out in the Jag / MPA Jefe, I got on my tag / All of my bitches like, I Dream of Jeannie,” and it’s hard to understand why he is being overshadowed by the Que’s and Rich Homie Quan’s of the world. He commits to each phrase as both a standalone quotable and a part of a whole, and he doesn’t feel forced, which many new artists struggle with. When he isn’t careful, though, he sounds like a Quavo mini-me finagling phrases with slightly more nuanced speech. It does carry its own set of perks, but more often than not it feels caricaturish. PeeWee spends a great deal of his time tightroping this line, and it produces a project that is one part grand introduction, two parts garble.

As a combined result of both his helter skelter flows and his Quavo body doubling, The Blue M&M is a mixed bag, a hodgepodge of delightful spurts of magic and a handful of dreadful lulls and miscues. While “How High” finds him swaggering around through a dreary fog at half speed on three different drugs, his voice far deeper than usual. On “Came In” he is absolutely dazzling, out-charming all three Migos members with a dexterous flow, and he immediately follows the triumph with one of the best songs of the year, “Sneakin N Geekin.” The Young Thug duet, “Juice,” deftly illuminates his shortcomings: as talented as PeeWee is, when standing next to an indomitably charismatic virtuoso like Young Thug he gets swallowed up. Same thing happens when A$AP Rocky shows up to close out the tape on the “Servin Lean (Remix).” He’s also just as likely to follow a dud like “Took Chances” with another dud like “Documentary.”

Suffice it to say that at this stage in his career PeeWee Longway is incredibly unpredictable and slightly volatile. With that in mind, it should be noted that there isn’t a single moment on The Blue M&M that suggests he can’t be a star. His main dilemma is that he has a tendency to get muffled by the stars around him—a byproduct of his stylistic kinship with Quavo and the Migos family; he is often stifled by those with louder, more established voices while he discovers his. Now that he is stepping to his own, it’ll be important for him to develop into a contender that can resonate in a crowd. After all, there are quite a few boisterous personalities in his own troupe. Perhaps the only thing left to do is to stop trying and get serious.