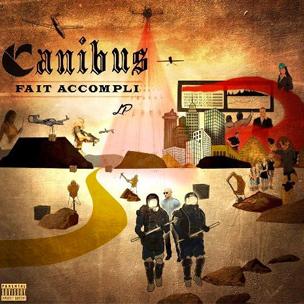 Canibus’ position in Rap is a little similar to Pete Rose’s in baseball: fans aren’t quite sure where to place him. Should Canibus be remembered for his prolific output, of which Fait Accompli makes the 15th full-length LP? Or should he be remembered for the lows of his career, such as when he broke every cypher commandment and read his rhymes off a notepad in a Rap battle in 2012? This newest album is certainly a vote for the first viewpoint, as Fait Accompli is just about as good as good can be for what it is. Contrary to past career flops, Canibus seems to have raised the artistic bar so high on this new album that he could only sink or swim, and he turns out to be capable of a damn good Michael Phelps impression.

The lofty goal he has set for himself here is no less than a concept album with a story that every human being is living out in the real world. It’s a cosmological opera with the world for a stage and a battleground over which the very soul of humanity is being fought for as a setting. The characters include God, The Antichrist, Canibus, and the listener. As he raps on the excellent “Sinflation,” “It’s always me and God when I’m talking,” or “This Ain’t The Movies,” where he rhymes, “The son of perdition wants to kidnap all of our women / And make slaves out of all of our children.”

The structural framework for the album is a series of interludes from a radio talk show’s segments that discuss different conspiracy theories, such as the Illuminati and Area 51. Canibus himself uses those bogeymen to set the artistic stage to publicize the gross pathologies of society from a philosophical, macro-viewpoint rather than a practical, micro-viewpoint. For example, the erosion of American civil liberties is at the forefront of the mind of this NY emcee on the song’s title track: “Why’s the flight time shorter than the pat-downs take? / It’s because freedom is fake in a police state.” He mentions Raytheon drones, name drops Pussy Riot and the fall of the dollar, but rarely does Canibus connect the dots or get into the specifics of censorship, conspiracy theory or an infringement upon civil liberties.

One of the knocks on Canibus over the course of his solo career has been his ear for production. Unfortunately, Fait Accompli does nothing to remedy this opinion. Producer JP Beats and his martial sonic world, full as it is of hard-hitting military snare drums and pugilistic army marching chants, assist Canibus. But sonically, the project falls flat. A lack of variety and overall hollowness plagues each production, as the snares, kicks and low ends all suffer from a dated, cheap sound. Combined with the fact that Canibus largely gives you only this one apocalyptic look, and the lack of versatility in both his delivery and the production, Fait Accompli becomes an increasingly difficult listen.

The literary landmarks Canibus’s cryptic style uses to put this ideological fight in perspective are accordingly universal, as he refers to everything from the Book of Revelation, H.P. Lovecraft, and The Fugees to Shakespeare, Five Percenter Theory, and millenarianism. Canibus utilizes contradiction, paradox, and irony to express meaning at a time in a postmodern era when meanings’ very meaning is being questioned. The nihilism found on “Sinflation” in Canibus’ observation that “The best outcome is always out of reach” is reflected all over the album, such as in his feeling on the 13th track, “Last Christians,” that “All the plaques we got were fake / Just like this horseshit reality they make you think you create.” With a dexterity characteristic of the whole album, Canibus even masterfully manages to bring his artistic message off the album and into the real world when he creates his own true liar’s paradox by telling you to not trust other people, and then telling you to not trust the person who is telling you to not trust other people: “Trust no one, even yourself / And this includes the person giving, receiving, or needing some help.” Judging by the simplicity of those short external rhymes, it seems that Canibus has somewhat sacrificed his usual tight technique for poetic message here.

But Canibus does resolve many of the usual downsides of apocalypse-themed art when his observations into politics go beyond a gloss of the usual political talking points. Meanwhile, instead of throwing up his hands and cursing the darkness, Canibus also gives listeners advice on how they can solve these problems: “If you were me I would be humble / Seek out those who love you.”

Fait Accompli will appeal very much to fans, but those fans will be in a smaller niche group who enjoy this very specific type of album. So if this isn’t your cup of coffee, then don’t feel too bad when you pass on it.