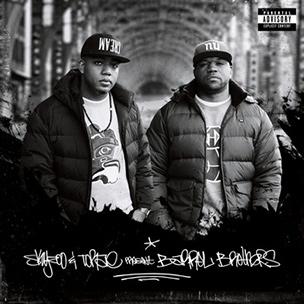 Duck Down Records, much like the New York City borough it calls home, is known for a gritty, lace up your Timbs style of Hip Hop. For nearly two decades, the label has prided itself on carrying on the tradition of hard-hitting boom bap. With the induction of Skyzoo and Torae in 2009, Duck Down added two proven underground emcees with a passion for lyrics as tough as the cover art for labelmate Sean Price’s Mic Tyson, solidifying the bond between the two frequent collaborators.

Now, with the release of their new 14-track LP Barrel Brothers (released through Empire via FGR & Internal Affairs Entertainment/Loyalty Digital), which features over a dozen rappers and producers, the duo have created a sound that combines the rugged and rough style of hardcore Hip Hop with the lyrical prowess of the genre’s underground, turning the album into a showcase of skill that, while light on its feet, packs a punch.

The Barrel Brothers set off with producer Oh No on the project’s first track to prove they’re the “Talk of the Town.” With a beat that’s somewhere between 9th Wonder and DJ Premier, who appears on the album’s final track, Skyzoo and Torae begin their verbal onslaught.

“Belts and rubber bands is my attire / D-Boy stance, my hands is by the fire / I been here to triple my plans like a supplier / Palms itching, the money chants is like a choir / Ain’t too many left on the land that I admire / So really I’m just rapping for me and a cranked tire,” rhymes Skyzoo, who seems to have an endless set of ways to brag and boast.

While proclaiming one’s accolades is a trademark of Hip Hop, both Skyzoo and Torae have each had their own past success: Skyzoo’s debut album The Salvation peaked at #16 on the Billboard Independent Albums chart, receiving critical acclaim; two year’s prior, Torae and Marco Polo’s Double Barrel EP was also lauded by both critics and fans. Still not impressed? The Barrel Brothers won’t stop until they “Make You a Believer.”

With a beat that leaves you peeking over your shoulder for a Meek Mill appearance, Skyzoo and Torae once again fire a barrage of hard-hitting verses, turning their peers into opponents with battle-ready rhymes. Yet as tough as Barrel Brothers can be, the two emcees excel by merging Hip Hop’s distinct underground sound with one more akin to New York City’s gritty hardcore rappers.

“Blood type is Yankee blue / Sky changed up off the steps and made a coupe,” begins Barrel Brothers’ single, “Blue Yankee Fitted.” Though the drugs, guns and violence found in the track would lead you to believe the duo was heavily influenced by Army of the Pharaohs, the muted horn courtesy of producer Illmind provides an underground feel that matches the calculated delivery of Skyzoo and Torae. Not quite purist or conscious enough for the underground, slightly less angry than what hardcore Hip Hop fans are used to, this offering to the birthplace of Hip Hop is as relentless as it is methodical.

And make no mistake, lyrics like these took time to cook up.

“You fuckin’ with the best in the borough, the Barrel Bros of Brooklyn / Ain’t nobody give us a lane, fuck it we took one,” raps Torae, on “Triangle Offense,” yet another proclamation of the duo’s greatness. Rather than a sprinkle of crafty rhymes, Barrel Brothers is slathered with lyrics like these that can’t be ignored due largely in part to their aggressive nature, but also thanks to their craftiness.

A true one-two punch, this album goes 10 rounds without losing a step, deep tracks like “The Hand Off” and “Memorabilia” delivering the same intensity and lyrical prowess as the album’s first half, a rare feat for today’s Hip Hop scene. Living up to the hype respectively earned by the album’s co-creators, Barrel Brothers leaves the two emcees a legacy they can be proud of and gives fans an album sure to make their heads nodding for months.