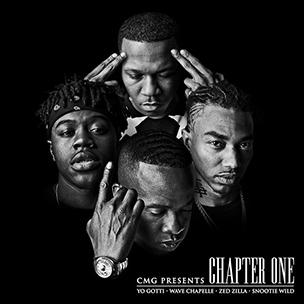 As a solo artist and businessman, Yo Gotti has built his brand through a relentless work ethic, an ever-growing knowledge of the back door deals of the industry and personal sacrifice. However, as focused as he has been on his own grind, he has also played a role in shaping other artist’s careers. In an interview with DX last year, Gotti detailed his work under former mentor Birdman, saying it was his job to recruit and develop talent before approving them for Cash Money—an experience that has led him to building his own house of artists, Collective Music Group (formerly Cocaine Muzik Group). When Gotti signed a partnership deal with Epic Records in 2013, he brought his CMG artists—the already established Zed Zilla and the fresh faces, Snootie Wild and Wave Chapelle. Almost immediately, Snootie took off with his single “Yayo” debuting at #50 on Billboard magazine’s “R&B/Hip-Hop Airplay” chart and #40 on the “Mainstream R&B/Hip-Hop” chart. It served as an effective foreshadowing as to what’s to come from the young imprint with its ever-ambitious CEO. As they offer up their first project as a true collective, formally titled CMG Presents: Chapter One, it’s clear that while the “C” may connote something different now, it’s still very much cocaine music.

The free mixtape begins with a promising intro, “Talk 2 Em,” which features the usual candid Gotti describing the past few months since his deal with Epic.

“L.A. Reid put the building on me,” he asserts. “I am surprised that nigga fucked with the streets.” Exploring similar topics as he has had before, from critics saying he can’t rap, blog sites replacing street talk, to his true intentions as a musical entity, Gotti lays a solid foundation for his young Milwaukee firecracker, Wave Chapelle.

At 20-years-old, Chapelle’s enthusiasm make him a breath of fresh air on “Talk 2 Em,” and also the rest of the project. While Chapter One is heavily invested in Trap music as a production-style and theme—to the point of it becoming asphyxiating—Chapelle’s appearances, placed in strategic moments of the album help keep pace and offer some variety. Furthermore, as the intro proves, Chapelle serves as a great balance, specifically to Gotti. While still rough around the edges, Chapelle is a more skilled and traditional emcee, who at times changes the sound of Chapter One from down South to an East Coast feel with songs such as “Like Me.”

For those looking for a taste of the Trap, some of the strongest moments are Gotti’s soul-bearing appearances. On the final track in particular, Gotti retells a gut-wrenching story about a robbery at his home when his girlfriend was there. “10 pm, four niggas with masks and they looking for me / My girl was there, but I wasn’t it/ The door flew in, they started busting…” Along with Gotti, Snootie is sure to land a win with “Stackin & Flippin It,” which has the same catchy energy as “Yayo.”

The same can’t be said for the “Yayo (Remix)” however, along with a host of other songs that simply mistake style for an underdeveloped and at times, apathetic approach. “Yayo (Remix)” for example, features Fabolous clearly simplifying his approach with the rhyming, “Yeah J.O., that’s what I call jumpoffs / Your baby mama on the dick, and she don’t wanna jump off / Sucka found out (What), hit the roof and jumpoff / It’s fucked up that a jumpoff, made a nigga jump off…” The situation is worsened when Jadakiss lends his trademark raspy voice to the melodic hook.

As Gotti so often proclaims, he is a part of this “more than music” template—provided by the full time hustler/part time rapper—where you’re only as good as your last check. Thus, the effectiveness of Chapter One as a music display is intimately connected with Gotti, Snootie, Wave and Zilla being able to further the CMG brand. Its appeal lies in serving as a high-energy, mildly varied showcase of mostly average level lyricists who capitalize off of telling street narratives rather than technical finesse. Maybe, instead of referring to anything as “more than music,” or less than music, it is more appropriate to say Chapter One is music and other things.