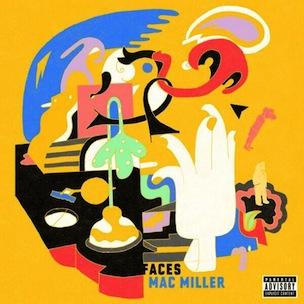 Counted amongst today’s most polarizing Hip Hop figures, Mac Miller remains subject to skepticism due to no fault of his own. A fair listen to 2013’s Watching Movies With The Sound Off shows the Pittsburgh, Pennsylvania native has undergone a radical improvement since relocating to Los Angeles, making compelling work with credit owed to the influence of associates including TDE’s camp. Given his story of independent success, Mac is afforded the luxury of making music on his own terms, straying from the course run by peers using mixtapes to stay afloat. Continuing his string of releases in conjunction with clothing from popular streetwear brand Diamond Supply, Faces has him in a rare space turning full creative freedom into a lucrative source of revenue.

Instead of enticing through lavish boastful materialism, Faces finds him once again attempting to make believers out of the doubters and gatekeepers who wrote off his unpolished beginnings. Though he’s a product of his own ingenuity, Mac Miller acknowledges the double-edged sword of race, an unavoidable point of contention that plays a huge role in his fan base.

Having arrived at a place where his presence can’t be easily dismissed, “Here We Go” makes a solid case for distinguishing himself from the pop-tinged leanings littering Hip Hop’s landscape. Mac bluntly states, “I’m underrated, don’t fit on nobody’s playlist / If I ain’t in your top 10, then you’re a racist.” Using this song to flex even further, another bold potshot comes by way of, “You spent your whole advance on two chains and a Gucci verse,” ending his two verses taunting, “I did it all without a Drake [or a Jay] feature.”

Mac Miller’s developed repertoire on Faces centers on honest witticisms, expressing his innermost thoughts through punchlines, and obscure references. Breaking every possible rule from verse structure to lack of hooks, his off-kilter routine requires patience, giving reminders of anti-heroes Kool Keith and MF DOOM. Poking fun at being named on last year’s most incendiary verse, Mac says, “No control, fuck Ken Lamar” on the six-and-a-half minute “Friends”—clearly unfazed and in good spirits given ScHoolboy Q’s adlibs on the song. At home over his own production (under the pseudonym Larry Fisherman), “What Do You Do” has Mac Miller trading imaginative playful bars back and forth with Sir Michael Rocks as he says, “Me and Mikey go back like Bron Bron’s headband.” Pushing the envelope as far as he can, on “Diablo,” the rapper turned beatmaker loops the Jazz classic “In A Sentimental Mood.”  This blatant disregard for convention was the cause of pioneer Lord Finesse’s copyright lawsuit against Mac, but it is why he goes endeared by fellow risk takers.

Either loosely based in reality or cinematic fantasy, Mac Miller spends much of Faces portraying the life of a drugged-up journeyman. Fathoming himself Hip Hop’s Hunter S. Thompson, he tells tales of dropping acid on the experimental “San Francisco,” also delving into the euphoria of tripping out on “Angel Dust.”

Carrying the torch left behind by Eminem, Mac Miller raps with a chip on his shoulder from allegedly being cast aside despite his earnest attempts. Running an excessive 24 tracks (and dragging with filler at points,) Faces is best suited for a long drive in lieu of a forced single sitting. Mac’s guests range from the pleasant surprise of a reinvigorated Earl Sweatshirt on “New Faces” to Rick Ross’ typically awkward button pushing on “Insomniak,” exclaiming, “Mac Miller’s my real nigga, fuck who don’t like it.” Pulling Mike Jones out of obscurity to appear on “Uber” best sums up this phase of Mac Miller’s career: he’s in on the joke walking the thin line between performance art and insanity.