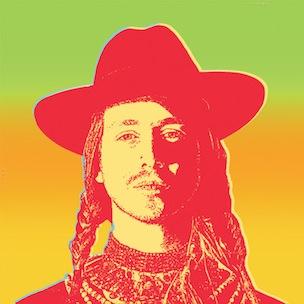 As Hip Hop gradually embraced its commercial success over the years, so too did dozens of emcees and producers looking to make the next big radio hit and enjoy an early retirement. In 2009, Asher Roth did just that when his hit single “I Love College” dominated the airwaves, peaking at 12 on the Billboard “Hot 100.”

But as time passed, Hip Hop’s gangliest emcee distanced himself from the successful party anthem, growing his hair out and hiding from the spotlight cast upon him. As it turns out, not all of today’s artists have placed fame and fortune over their love of music after all.

Five years, two mixtapes, one EP and one nasty fight with a record label—followed by an open letter to his fans—have all been part of the dramatic buildup to Asher Roth’s sophomore album RetroHash. The new project, a 10-track combination of soul-tinged Jazz with borderline hippie tendencies, often forgoes bars similar to those found in previous mixtapes like Pabst & Jazz, yet displays a high level of lyricism when Roth does decide to rap. Though RetroHash is liberal with its creativity, Roth seems to realize he only has one true shot at redemption, and in turn has put forth another impressive effort to reshape his image that will undoubtedly cause some to question why he is so often overlooked.

“‘Cause the cash rules everything around me / So, every now and then, feeling like I’m out of town / Got to chill, sit down, remember how to be a child / Wide eyes with a smile,” rhymes Roth with a coffee-shop-smooth flow on the album’s opening track, “Parties at the Disco,” which features songstress ZZ Ward. Less of a party and more of a blunt ride with insightful Bay Area wordsmith Gift of Gab, the track prepares the listener to wrap their head around the idea that Roth has indeed slowed down; he even goes one step further by assisting Blended Babies—the album’s beat-making duo and longtime Roth collaborators—with the track’s production. And he’s only getting started.

“Cut my hair in two years / Drink beer, get weird / Get clear advice when my friends tell me get real,” raps Roth, his flow shifting from the laidback style of the previous track to a tongue-twisting rhyme scheme presented in a far darker tone. With the help of Curren$y, Roth teases the listener with his complex delivery before diving back into the mellow, yet upbeat vibe of the album’s third track and first single, “Tangerine Girl,” which offers up a careful mix of catchy lyrics and surprisingly on-point vocals.

“Tangerine Girl” is the closest Roth gets to a radio ready single, lacing the beat with a mix of vocals and rhymes that fall short of impressive on either end, yet are memorable enough to entice listeners to put the song on repeat. By slightly straying from rapping, Roth has found a happy medium that suits him well; it may also better prepare him for further mainstream success.

“Pull It” is much the same as it’s predecessor, veering away from what could be a surprise Reggae offering to reveal a well-crafted beat that allows Roth to swerve in and out of rapping and doing his best crooning Justin Timberlake impression.

While RetroHash seems focused on Roth’s reinvention, something that may disappoint those who enjoyed the more familiar lyric-heavy style he displayed on mixtapes like The Greenhouse Effect vol. 2, it may better suit the now-introspective rapper, whose reserved take on his former allegro-style rhyming has been replaced with thoughtful lines that seem to hit at the perfect time. His longtime fans will find solace in tracks like “Last of the Flohicans” and “Be Right”—both featuring Major Myjah and both a far cry from Roth’s second most successful single, “Lark On My Go-Kart”—but many of his loyal followers will be left searching for the raw flow Roth exhibited on prior projects. Less of a happy medium and more of a hard reset, RetroHash is the beginning of what may shape up to be the rebirth of Roth’s career.