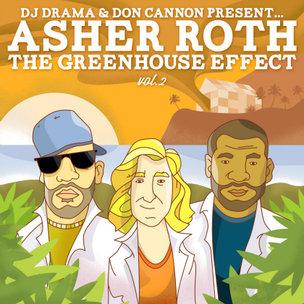 The abrupt rise and fall of Asher Roth’s relevancy within the last five years has been a peculiar event, to say the least. The Morrisville, PA emcee caught lightning in a bottle with the 2009 laid back jaunt “I Love College,” and brokered that into a lucrative deal that saw his debut Asleep In The Bread Aisle crack the Billboard charts, though the album itself was an underwhelming collection of musical miscues. Since then, he’s released more respectable projects like Pabst & Jazz and The Rawth EP (alongside producer Nottz), yet those have failed to move the needle in a positive direction. The 27-year-old rapper now looks to recapture the spark that he acquired on The Greenhouse Effect Vol. 1 with its proper follow-up.

Asher’s lyrical disposition can be a volatile experience, but when he’s on, the potential is palpable. Over bursting kick drums and fiery synth, Asher is on a vicious war path with “Eggs Florentine,” while “A-One” is ripe for the replay button. Picking up on Don Cannon’s stellar production for “Numbers On The Board” (he co-hosts this mixtape with DJ Drama), Roth delivers a highlight reel of rhymes mixed with in an intriguingly dense flow. To that point, while most of his lyrics settle on metaphor flips and extracurricular episodes, he also isn’t ashamed to admit his ruffled past, as he puts the widespread criticism into perspective on “Pearly Gates” with the following:

“I’ve been shitted on, spit up on, dissed and forgotten / Rick Ross can be a cop, Drake started from the bottom / No offense, I don’t want to start a problem but come on / All I ever did was tell you I was champ in beer pong.”

Similar to the first volume, this project mixes in a medley of “O.P.P.” (other people’s production), but the results don’t prove to be as convincing. Selecting the dated backdrop of “Pass That Dutch” is an odd match, though Asher scrapes by with uncanny wordplay. The same can’t be said for “Blurred Lines,” where his stabbing delivery stumbles over Pharrell’s slick production. He attempts to loosen up with the Caribbean vibe of “Freaks,” but ends up coming off as more perverse than playful (“I used to watch scrambled porn alone in the basement / But I don’t watch anymore, naw girl, I make it”).

Therein lies the biggest flaw with Greenhouse Effect Vol. 2; instead of doubling down on conceptual records that could make an impact like “Just Listen,” “Fallin’” or even “G.R.I.N.D.,” Asher Roth would prefer to stray away and enjoy “the scenic route.” What does that mean? Hastily piecing together empty collaborations (“Actin Up”), revisiting his trite frat boy persona (“Girlscout Cookies”) and harboring a limited amount of humility (“Lil Butt”).

The Greenhouse Effect Vol. 2 doesn’t represent the prominent return that Asher Roth was aiming for, though there are moments here that he can build on. Still, with the lingering notion of being a “one-hit wonder” hanging over his head like a guillotine, Asher can’t afford to falter much longer.