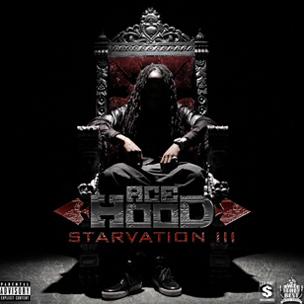 Over the course of four albums and several mixtapes, Ace Hood has situated himself as a rapper that is for the streets, by the streets. The position hasn’t exactly been that lucrative for the 25-year-old from South Florida. Aside from a few hit singles that he can claim as his own, Ace typically disappears whenever the discussion of young notable rappers pops up. That recipe doesn’t change on his new mixtape, Starvation III, where he stays firmly entrenched in appeasing those that go to sleep with one eye open.

Ace Hood comes out the gate strong with “Fear” and “Everyday,” records that highlight a daily grind mentality. Save for his questionable use of Auto-Tune on “Everyday,” these songs serve his demographic well by delivering a gritty style backed by convincing rhymes. This sincerity can similarly be heard on “Buss Guns,” a record that on the surface sounds formulaic at best. However, Ace Hood tackles the subject with remarkable detail, referencing Chief Keef and abiding to the codes of the street in the process. There’s also a chip on Hood’s shoulder here, and he addresses it accordingly. “I’m feelin’ myself getting money every day like a young nigga supposed to / Can’t walk in my shoes, take a look in my eyes, you don’t know what I’ve been through,” he raps with vicious intent.

Considering the progress Ace Hood makes at the beginning of Salvation III, it then becomes disappointing to watch him fall back into a hole of creative stagnation on the latter half. Reazy Renegade’s menacing beat on “F.Y.F.R. (Fuck Your Favorite Rapper)” is the equivalent of tossing a softball to Mark McGwire during his juicing days and seeing him whiff. It’s nearly impossible to sound bad because Renegade’s production is so good, yet Hood misses the mark by attempting to stake his claim as the South’s Kendrick Lamar. He fares better on “Hip Hop,” though the actual theme behind the record takes its cue from Common’s “I Used to Love H.E.R.” And classics are better left untouched than emulated.

Ace Hood switches up the tone on “Save Us,” a somber track that uncovers the ills of his community. The results are incredible, with Betty Wright’s powerful vocals on the hook gliding across the melancholic backdrop. Ace digs past his usual corner boy bravado and gets to the heart of the matter, rapping, “There’s a war going on outside, it’s devastating / The hoods segregated by cliques and affiliations / City full of satans who facing no limitations / Turning on the news and it’s poison throughout the nation.” Incorporating more moments like “Save Us,” instead of the trite narrative behind “R.N.S. (Real Nigga Shit)” or the lackluster club record “Skip the Talk’n,” would have produced a better balance here.

While Starvation III is a noticeable improvement from the first two installments, Ace Hood once again falls short in delivering a full-length project that feels substantially impressive. He has his moments of lyrical triumphs, as well as a determined attitude that never wavers throughout. Ultimately, Starvation III will get its fair share of spins before the next bubbling street rapper drops their new project. And so the cycle continues.