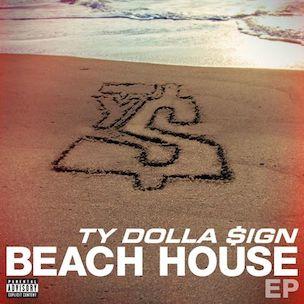 Life sounds amazing for Ty Dolla $ign. Traveling cross country collecting checks, beautiful women cluttering the cypher, ocean waves crashing in the distance—all with little to no real world consequences. For the Atlantic Records artist, everyday ends like the closing scene of an Entourage episode. At least that’s how it’s depicted on his recently released Beach House EP. The seven-track offering spills alpha male-isms from a “money-over-bitches” point-of-view, yet remains sultry enough to appeal to the fairer sex. It’s a tenuous balance Ty walks like a seasoned tight rope artist.

Take dynamic opener “Work,” for example. Over a lush, multilayered arrangement littered with glorious horns and strings, Dolla $ign bemoans about how “These hoes all tryna come back and make it work.” No problem, though. Ty gives “no fucks,” he gives “no damns.” He simply tells “These hoes to come get this work.” Contextually, nothing here is new yet it somehow still sounds fresh. Twista delivers an incredible guest verse and, outside of Casey Veggies’ series of lackluster bromides, “Work” is a great song.

“Familiar” (featuring Travis $cott and Fredo Santana) and “Wood & Leather” (featuring Big T and Pops) succeed through the same formula, as well as the Wiz Khalifa-assisted “Or Nah.” Both “Paranoid” remixes ensnare men commiserating with the stress of wifey and side chick colliding in the same nightclub along with those happily ignorant enough to aspire to that hairline receding situation.

Let Ty tell it, and every woman dances to his dalliance like cats to yarn. His female infatuation is clear. But how bold is the line between admiration and disrespect when crafting forthright fornication music? Each track plays out through a series of narrative snippets enjoyably void of accountability. Dolla $ign always seems to be right, even when doing wrong. “Never Be The Same” (featuring Jay Rock) takes a reflective step, but more so through emotion than example. “Seen me with my side hoe, and told my main bitch, nigga,” Ty sings, playing the victim to his victimizing. “Yous a bitch nigga / And now we in the club / Go on and fuck it up / Yous a huge fan / Tryna introduce me to your fam / Takin’ flicks for Instagram / You more sketchier than drawers.” The song is melancholy and soulful and bombastically throwing a Freedom Tower-sized middle finger to the cock blockers.

From mic to plug, Beach House EP triumphantly strikes the same note. The Los Angeles-native is a talented songwriter even while essentially re-writing the same song, which is a complicated square to dance in without two-stepping too close to redundancy. Remaining interesting without contextual diversity is tricky. Fortunately, Ty Dolla $ign doesn’t have those problems.