Kid Ink - My Own Lane 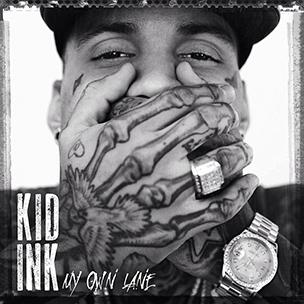 While the news of an artist signing to a major label is typically met with skepticism, Kid Ink’s decision to sign with RCA last year felt like a natural progression for the Los Angeles native. Since breaking into the Rap scene in 2008, Ink has proven to be an individual who can score a hit that caters to the club and streets alike. Along those same lines, the 27-year-old has a sound that stays on top of what’s now. In a sense, Ink offers everything a record label is hoping to gain when they open up their doors to another talent on the roster.

As cliché as the title for Kid Ink’s second album may sound, it’s a fitting description for where he’s at in his career. My Own Lane doesn’t seek to break new ground as much as it reinforces a stylistic attitude that was evident on his independent debut Up & Away. His two collaborations with Chris Brown, “Show Me” and “Main Chick,” display early and often Ink’s penchant for tailoring melodies for the masses. Like his moderately successful single from 2012, “Time Of Your Life,” Ink also doesn’t shy from extending his lyrical delivery to the ladies by harmonizing alongside the buttery production from DJ Mustard. It’s a formula that’s executed well by the rapper, and similarly shows up on the August Alsina-assisted “We Just Came To Party.” He’s essentially setting the tone for a Friday night out. All the listener has to do is press play.

Kid Ink’s craftiness on the lyrical side has never been a huge selling point, but he certainly displays his effectiveness on My Own Lane. “No Option” finds the emcee skillfully ripping a double-time flow as he brags about his bankroll before King Los jumps in to keep the spirit of competition alive. Kid Ink also offers a moment of clarity on “No Miracles,” which features Midwest bad boy Machine Gun Kelly and songstress Elle Varner. The lineup of artists on this record may seem unconventional, but they each play their role for an impressive performance that’s bigger than the sum of its parts. Kid Ink takes the opportunity to shed light on his come up, which wasn’t a guarantee by any standards. “Just look into my heart you can see the grind / Look into my eyes you can see the pain / Painted a perfect picture where I came from / Some nights when I thought I wouldn’t see the sun,” he raps. His determination and will to succeed shines bright on “No Miracles,” which proves to be a standout cut that shares a different shade of the rappers’ journey.

What My Own Lane ultimately lacks is a true sense of creative risk from Kid Ink. For someone who walks around sporting a “badass” demeanor with the tattoos to match—and yes, there is a record wholly dedicated to his physical attraction of girls getting inked up—he plays it pretty safe. Case in point, the album-opening “Hello World.” The record is meant to be this upbeat moment of celebration, yet it comes off as shallow, abrasive pop Rap that Flo Rida hasn’t even treaded water in. On the surface “Rollin’” serves its motivational purpose for taking that next shot of Patrón, and Mustard once again delivers a beat so smooth that a chaser won’t be necessary. Less smooth is Ink’s awkward approach at referencing Tupac songs. For someone who calls Los Angeles home, his execution in paying homage could definitely use some work. Even his collaboration with Pusha T on “Murda” is toned down to the point that loses its menacing vibe. The only shots that can be found here are chilled.

My Own Lane bridges the mainstream appeal of last year with a stylistic presence that could possibly set the tone for 2014. Its musical influence pretty much stops there. Kid Ink will certainly have more opportunities in the future to prove why his lane is the movement to move with. For now, that lane is going 35 mph, and Ink is comfortably in cruise control.