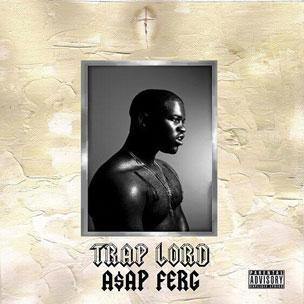 It’s been just over eight months since A$AP Ferg’s label mate and fellow Mob member, A$AP Rocky topped the Billboard 200 with his own debut album. The success of LongLiveA$AP, coupled with the instant viral boom of Ferg’s 2012 street anthem “Work,” meant expectations for Trap Lord were immediately high. Trap Lord showcases a heavy ‘90s aesthetic powered by Ferg’s own tastes and influences as well a guest list plucked from a vintage “Rap City” episode, courtesy of appearances from Bone Thugs-n-Harmony, Onyx and B-Real of Cypress Hill.

Ferg’s comfort zone is throbbing 808 bass, accented by stuttering high-hats to complement his weapons of choice: aggressive rhymes in a Bone-inspired, double-time cadence, complimentary melodies (“Hood Pope”) and some sophomoric humor for good measure (“Me and Rock run trains on a hoe / He be like bitch don’t touch my braids…”)

“Let It Go,” is a fitting initial salvo, since, for the most part, this is the album. Ferg rhymes, “Kill a mothafucka with the magnum 44 / Bout a jump slump, nigga, magnum on the road / Body full of bullets when he found him on the road / Lay a fucker down, spray it at him then reload…” This theme, and even it’s brooding backdrop, are persistent throughout the entirety of Trap Lord. Ferg’s flow, presence, and versatility of cadence are undeniable, but the content of his rhymes doesn’t change much. While there is something to be said for cohesion and consistency, a lack of variety can border on repetition.

Surprises and some necessary variety come via Ferg’s competent melodies on “Hood Pope,” and the track offers a bit of the type of commentary that separates mindless, violent rhymes from what was originally deemed “reality rap,” before the term became so trite. Such moments are scattered throughout Trap Lord, and more of these moments would ultimately help put it on equal footing with some of 2013’s better albums. Ferg makes various references to the Supreme Mathematics of the Nation of the Gods and Earths on “Lord” rhyming, “Reincarnation of Master Fard / Elijah Muhammad reside in my heart…” And after the bodies pile up, Bizzy Bone offers an extended prayer. It amounts to a head-scratching, but slightly more balanced affair.

As the album progresses, however, there is a return to a redundancy in subject matter and intermittent Jamaican patois. Even so, genuine highlights exist on the remix to “Work,” “Fergivicious,” and the Waka Flaka-assisted “Murda Somethin’.”

Finally, on “Cocaine Castle,” Trap Lord’s penultimate track, Ferg gives listeners a song with some depth and a vivid image. He spits, “Another day in the crack house / Where demons be talking to fiends / Couple hits and they blackout / Needles be stuck all in their veins / Sing a song that be stuck all in your brain / That shit so potent, it’ll have you doing devilish things / Take a walk through the dark side…” With harmony in his delivery, Ferg’s proudest track is one of the album’s standouts. Even on the production side, “Cocaine Castle” delivers. With grandiose organs, tempo changes, and a chopped and screwed second verse, the song is a victory.

Overall, A$AP Ferg’s Trap Lord, is a solid, if an sometimes-uninspired effort. It occupies that zone between the mindless “turn up” music and projects that have gotten a praise for being entertaining enough to at least partially negate a desire for more depth. Ferg is at his best on the handful of songs that reach for something more than male bravado and flossing. But, in the end, listeners don’t get enough of those or his agile rhyme cadences to push this into the realm of an upper-echelon album.