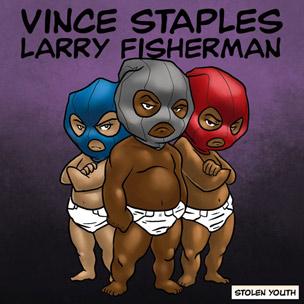 As one of Odd Future’s lesser-noticed affiliates, Vince Staples has sought equal recognition while consciously avoiding the spotlight his peers have found themselves immersed in. Standout cameo appearances with Earl Sweatshirt helped his buzz take flight for solo releases where he has risen from the shadow of accomplices to be considered a force within his own right. With Pennsylvania transplant Mac Miller becoming a key figure of the modern Los Angeles Hip Hop renaissance, his hand at production under the pseudonym Larry Fisherman benefits Vince as the two have united for Stolen Youth.

A breakout moment for both Vince Staples on the emcee front and Mac Miller behind the boards, Stolen Youth is the product of creative ambition and an organic, refreshing chemistry. Determined to make good on Mac’s charitable efforts, Vince spends the project channeling hopeless pessimism that doesn’t manage to distract from his lyrical gift. Without remorse, “Stuck In My Ways” depicts a troubled young man barely removed from adolescence in need of inspiration explaining, “In the field don’t nothing but grit matter / Just get it how you live and figure the shit after…” This same desperation is found on the mellow “Outro,” where he runs laps over sparse keys saying, “Never had to show a lot of effort with the Rap shit / Going for the kill cause I never really had shit…”

While Vince Staples has a penchant for painting ugly pictures, what shines through Stolen Youth’s dismal tone is a hunger to be taken seriously among today’s up and coming contenders. The gloomy “Intro” and “Guns & Roses” are semi-autobiographical descriptions of the dark conditions that drive his competitive nature, whereby he matches or outshines the guests throughout the album’s 10 tracks. Another relationship Mac Miller has fostered is one with the TDE/Black Hippy crew, this alliance establishing a place for Vince to prove himself alongside ScHoolboy Q on the turned up “Back Sellin’ Crack” and Ab-Soul on both “Killin’ Y’all”  as well as “Sleep” (where Mac nearly steals the show rapping over his own work).

Tapping into a persona loosely based on his harsh Long Beach upbringing rather than the recent surroundings of skateboarders and streetwear, Vince Staples inches his way closer to greater prominence with the masterful Stolen Youth. Gifted at crafting narratives dealing with urban decay, his maturity as a creative orator surpasses his 19 years of age, sure to propel his legend as more listeners begin to pay attention.