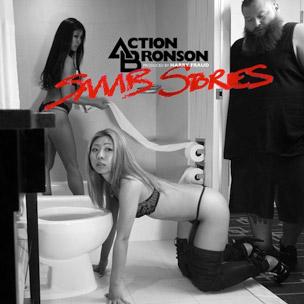 After dropping well-received joint projects with everyone from Party Supplies to Alchemist, Queens rapper Action Bronson links with Brooklynite producer Harry Fraud to create Saaab Stories. It’s a partnership fans have been clamoring for ever since the rhyming chef did “karate in the water” alongside Riff Raff over la musica de Harry Fraud on 2012’s “Bird On A Wire.” But how does the project measure up to Bronson’s previous efforts with other producers, especially with so much less?

On the EP opener, “2 Virgins,” Action wastes no time building a narrative up from scratch, alluding to “nickels of dirt” to signify humble beginnings and building himself up verbally into something more ruthless (“Close my eyes, spray the whip, hit your rib twice / Now your kids gotta deal with this shit, ‘cause this is life…”). It’s that rhyme style purists can appreciate for the humorous-but-serious references delivered with that no-nonsense slow flow. There are multiple references to ‘90s NBA mainstays Shawn Kemp, Dikembe Mutombo, involuntary bowel movements and some cocaine sniffing, just for a bit of variety. The slang-illiterate and those unwilling to Google the obscure references will still gravitate to this if for no other reason than Harry Fraud’s innate ability to sound modern and capture the ‘90s aesthetic in a way that refuses to cater to cultural interlopers.

The inclusion of sidekick Big Body Bes is also great for the brash humor he adds—complete with threats to “smack the shit out you then slap your son five.” Bes is as crass and hilarious as the classic Wu-tang skits. This is “Lifestyle Rap,” and as soon as you press play, you’re a character in Bronsolino’s world. In said world, he’s got his homies with him, playing hype man to themselves—forget the star. It may hamper the listening experience for some, but again, this is Hip Hop.

Harry Fraud holds down his end on “2 Virgins” as well, providing a meandering plethora of guitars and bass that sounds like an Astoria, Queens version of a Wild West showdown. The chemistry continues throughout the project. On “Triple Backflip,” Fraud hooks Action up with that lucid-dream production, mixing lush bells with woodpecker-like percussion. On “No Time,” the producer constructs a feel good track with its own trumpet solos that match the whimsical feel of the rapper featured.

Surprisingly enough, the stand out moments from the project aren’t like “Bird On A Wire” or the other weed-friendly vibes that dominate the EP. The single “Strictly 4 My Jeeps” might be Action’s first mainstream-friendly hit—as its sample of Lowell Fulsom’s “Tramp” (fans of EPMD and LL Cool J’s “Rampage” should be familiar) is tailor made for the whip and dance floor dry humps. And then on the other, other end of the spectrum there’s the latter half of “Alligator,” which features a distorted horn that sounds like something you could read the biblical book of Revelation out loud to. Appropriately enough, Action doesn’t disappoint either, rapping, “Thank God I don’t believe in heaven,” as he fornicates with a reverend’s daughter, ending the encounter with, “I think it’s annual abortion time.” These are two extremes Action has been able to visit but not build a house on without Harry Fraud’s production.

Overall, Saaab Stories is the meeting of two artists who push the old Hip Hop formulas to new places unlike other ‘90s era revivalist types who would rather cling on. The last entry in the EP, “Seven Series Triplets” is evidence of that as Harry Fraud provides that darkness while Action raps nonchalant among two New York legends.