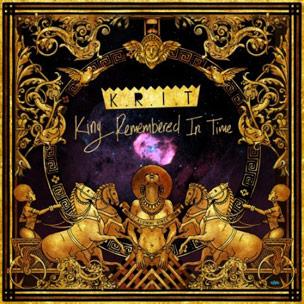 While the release of his major label debut Live From The Underground may have been a career benchmark for the Meridian, Mississippi-native, Big K.R.I.T.’s reputation at this point has largely been built on his ability to deliver mixtapes that rival full-length albums. With as many mixtapes as years since dropping K.R.I.T. Wuz Here in 2010, Justin Scott shows little signs of a debut hangover on King Remembered In Time.

K.R.I.T. has unmistakably progressed as a lyricist, and his latest project illustrates this thoroughly with the memorizing licks of “R.E.M.” and “Meditate,” as well as the haunting visuals on “Banana Clip Theory.” Detailing the devastation brought on by gun violence, Big K.R.I.T. twists rhymes as he attests, “I heard a gun the other day, it spoke to me and told me power / Was the only thing that we could lose, so don’t be afraid to let it shower.”

Taking a more metaphorical approach, “Life Is A Gamble” plays on the theme of survival; “This tracks my gurney, my verse can be the ventilator / So I breathe, ‘cause loathing in Las Vegas wasn’t meant for me / Too scared I’ll stay too long and forget where I’m really meant to be / Heaven maybe, heaven lately, but all these lights are captivating / I had to play it, for the sake of me and mine / Lord, I pray I hit it big this time.” The immaculate 9th Wonder backdrop here serves as the first record on a Big K.R.I.T. project not produced by the man himself. He has recently stated that his sophomore album will feature other producers, and if this is any indication of its direction, fans have little to worry about with the transition.

Accustomed to keeping a relatively short guest list on hand, Krizzle taps frequent collaborators for results that do not disappoint. The mellow vibe and scent of fresh trees in the air courtesy of Wiz Khalifa and the self-proclaimed “Kush God” Smoke DZA make “Only One” a smoker’s anthem, While Bun B’s appearance on “Shine On” justifiably warrants a petition for a duo project between the two southern emcees. Matched up with his Def Jam brethren Trinidad James, “My Trunk” is a charismatically brash record that will have even the most introverted listener doing a shoulder lean.

If there’s an inadequacy to point out on King Remembered In Time, it would be a slight dip in execution from its predecessors. Whereas Return Of 4Eva and 4Eva N A Day flowed smoothly between tracks, an unsettling snippet like the Future-assisted “Just Last Week” or his staggered cadence on “WTF” stymies an otherwise outstanding track list. Similarly, his hook game hasn’t developed much. In the past he’s gotten away with terse lines on “Yeah Dat’s Me” and “Sookie Now” off the strength of his zeal, but shouting, “What the fuck we gonna do now?” and “How you love that?” incessantly isn’t the most creative way to keep someone engaged.

Big K.R.I.T. takes on the title of his bold namesake with a performance that will not only strengthen his core following, but also leave little doubt that failure is not in his repertoire. With a valiant demeanor, he asks, “What’s a king without a crown?” It’s a fair question, because frankly it’s been a while since his dome has been vacant.

Listen to King Remembered In Time by Big K.R.I.T.