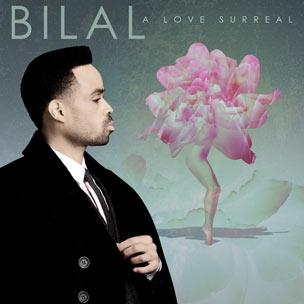 Love songs can be tricky business. At its core, the majority of Soul/R&B music is about falling in and out of love and all the complications it brings. As Bilal quips, “Like grandma used to always say, ‘nothin’ new under the sun.’” The only thing really separating Jeremih’s “Birthday Sex” and the other pop drivel that dominates Top 40 radio from the material people prefer labeling Neo-Soul is execution and a matter of personal preference. The amount to which the gap between the two sub-genres has narrowed is debatable. But, for better or worse, Bilal has generally been lumped in the Neo-Soul category since Vibe magazine’s Soulquarians photoshoot in September of 2000. His third solo outing, A Love Surreal should do a lot to change that.

There were times—particularly on his debut, 1st Born Second—where Bilal has been eccentric just for the sake of being eccentric. It’s a quality that should be applauded, but also not one that has been successful at drawing in new listeners. But A Love Surreal finds him simplifying things. As a result, he’s more relatable without dumbing things down. When he sings, “You ain’t gotta talk a bit / Body talk a lot of shit / Got one question / Could you roll with a cat like me,” on “West Side Girl” the lyrics can just as easily be appreciated by an octogenarian on a Tom Joyner cruise as a 15-year-old skimming through a Spotify playlist.

Bilal is equally comfortable over Robert Glasper’s sparse piano (“Butterfly”) or an acoustic guitar (“The Flow”). Yet even with all of the experimentation, tracks like “Back To Love” address the type of issues every couple deals with. He’d like his woman to call in sick so he can whisk her off to Spain. But there’s also the all too familiar questions, “What are we here for / What are we doin’ / Last time I checked / Thought it was screwin’…”

That said, this is far from paint-by-numbers R&B fodder. It’s bends genres, and on songs like the Mary Jane ode, “Climbing” or “Longing And Waiting”—which is more likely to aid in conceiving a child than appeal to one—Bilal is in adults only mode. He still likes to use his voice as an instrument at times. So while you won’t find him scat singing, he has become much more adept at probing the negative space in a track, even when using simple lyrics.

By co-opting the title of John Coltrane’s 1965 classic, A Love Supreme, Bilal is at least hinting at lofty expectations. For the most part he exceeds them. Since everyone has experienced either some success or failure at love, the subject is familiar territory. But with some creativity and innovation, it’s possible to display a deceptively simple approach. Therein lies the real trickery.