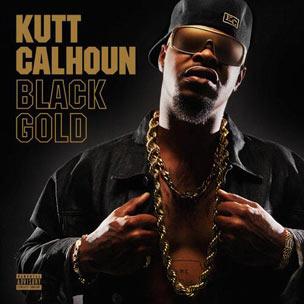 Let Kutt Calhoun tell the story, and he’s the most underappreciated commodity in Hip Hop. That may be the reason why he’s described the name of his latest effort Black Gold as a parallel to nature’s most prized resource. An interesting yet unnecessary metaphor, the meaning of the title is more akin to the fact that the Kansas City rapper shines through here without acting overtly brash or gaudy.

Calling upon his celebrated label mates, the opening cuts on Black Gold are a welcoming collection of collaborations that exhibit the rowdy and zealous style associated with Strange Music. Krizz Kaliko brings his magnetic pipes on “Self Preservation,” while Tech N9ne comes through with a verse on “I Been Dope” that becomes an instant album standout. “501s and Rightsides” highlights Calhoun’s associated gang ties, with Brotha Lynch Hung delivering a hook that is as aggressive as it is frank. In that respect, any issues found on these early records by devoted Strange fans would simply go under the category of nitpicking.

By stark contrast, the album’s tail end displays an emphasis on subjects that are more relatable, with thankful perseverance (“That’s My Word”), relationship troubles (“Baby Momma Drama”) and societal chaos (“Hello and Goodbye”) filling the rapper’s lyrical spirit. In each instance Calhoun sounds as focused as ever, with the latter track sending an impassioned prayer to the victims of Sandy Hook:

The biggest issue with Black Gold becomes Kutt Calhoun’s flirtation with trite clichés. “Jack Tripper” plays off the theme of ‘70s sitcom “Three’s Company,” but the lyrical composition here is anything but family-friendly (“Got a friend named Meagan / Her pussy is so good / Lips so big / She could suck the water out the wood”). Similarly, “I Don’t Like the Look of It” interpolates a Willy Wonka line that a plethora of other rappers have used before. Calling out the hood fabulists on “See What Had Happened Was,” Calhoun runs down a menu of routine lies over a rinky dink backdrop. Playful by nature, the shelf life of these records do not extend past the first few spins.

Black Gold revels in its ability to highlight the unique approach of Strange Music while still sounding refreshingly conventional. At 35 years young, Kutt Calhoun is picking up traction when other rappers would be given the checkered flag. Underappreciated or not, that’s something that won’t go unnoticed.