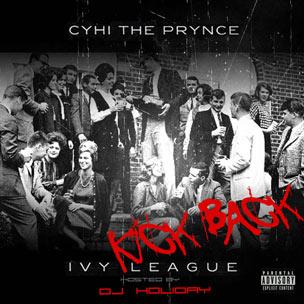 That isn’t to say that the album doesn’t have bright points. In fact, there are some intriguing aspects of the tape that are hard to ignore. Perhaps no spot is brighter than “Start A War,” produced by Arkatek Beats. The beat flips Adele’s “Turning Tables” to become a well-crafted song with potent lyrics to match the strong chorus and sample. Here, CyHi showcases an aspect of emceeing that would have been nice to see in more places throughout the project—a knack for storytelling and compelling rhymes. Elsewhere, CyHi brings a sense of fun to the table, making that shine on “Young, Rich, Fly & Famous” (featuring Childish Gambino), “I’m Catching Feelings,” “Kickback” and “We Drink, We Smoke” (featuring Big K.R.I.T. and Yelawolf).

But overall, the tape feels sloppy. Ivy League’s college skits could have helped narrate the album but instead serve as seemingly unnecessary distractions. The instrumentation is not cohesive across the board, and the conceptual nature of the tape falls flat in the end, like a less impressive version of Masta Ace’s critically acclaimed effort, Disposable Arts. Lyrically, CyHi gets lazy with the bars. At one point, for instance, The Prynce shares that he’s “getting dough, deep dish.” Moreover, the tape is lengthy, with over 20 tracks and skits, making it feel dragged out and overdone.

As an artist with Kanye West’s stamp of approval, one would imagine that CyHi would release an effort worth noting in anticipation for his full-length. Instead, CyHi has released a forgettable project that only has some bright spots. While fans may enjoy the laidback fun that appears on the tape, many will find that the project’s concept was half-cooked. While it could be said that it’s only a mixtape, it’s also important to note that it’s 2013. Today, fans expect quality material from tapes as much as full-length albums. So this could have been something memorable but instead, it ends up being quite unremarkable and far too laid back.

Listen to “Ivy League: Kick Back” by CyHi The Prynce