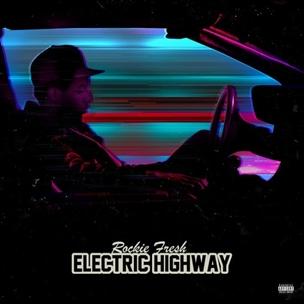 Aside from a handful of appearances on Rick Ross’ underwhelming mixtape The Black Bar Mitzvah, Maybach Music Groups’ latest addition Rockie Fresh was relatively quiet after signing day. With Driving 88 becoming his calling card, the Chicago-native took this time to season his abilities, and Electric Highway is a clear reflection of this as it rarely loses sight of what Rockie sets out to achieve.

As opposed to the fiery bark of label mate Meek Mill, the 21-year-old rapper moves with a more mild, if sometimes monotonous delivery, but it’s one that stays consistent throughout the project. In that regard, whether he’s flipping metaphors on “Superman OG” or chin checking the competition with “Barrell Of A Gun” (“A lot of these rappers be out here wilin’ / Out here talking all violent, I prefer to move silent”), Rockie sounds as composed as a vet. That in turn translates on his performance for “Life Long,” where pitted between Rozay and rhyme slinger Nipsey Hussle, he still shines through.

Along with Rockie’s steady approach, the real winner here is producer and ‘Windy City’ brethren The Gift who handles his role with exceptional poise. “Thick Bitch (Hit My Jack)” is an eccentric backdrop locked in cruise control as Rockie follows along with slick rhymes. With shades of reggae and synth-blaps, as well as Curren$y appropriately in the passengers seat, “Roll Up Right Now” is definitive session music sponsored by RAW.  “Father Forgive ‘Em” shows he can also execute production with urgency, though Rockie doesn’t quite hold up his end. House money says The Gift will acquire some new clients off of his work here.

While sticking to the theme, the latter third of Electric Highway drags as a new layer of experimentation produces mixed results. “Ride Slow” and “I’m Ready” incorporate an auto-tune pulse (think Kanye West a la 2008) that is more burdensome than impassioned. Then on “Lights Glow,” Rockie grazes through Kid Cudi territory with melodic musings of life. The record itself isn’t that bad, but you can also tell he hasn’t fully developed a command for this particular style. On the opposite spectrum, “I’m Wit It” languishes with Rockie attempting to sound tough over a trap rap loop. A trimming of the fat, so to speak, would have come in handy here.

With a slow burn, Electric Highway is a solid mixtape that will have listeners reaching back months down the road to discover a new sense of appreciation for it. Rockie Fresh may not possess Wale’s lyrical prowess, nor the ferociously robust demeanor that would appease a diehard Ross fan, but his presence brings a new wrinkle to the team that will benefit them in the long run.