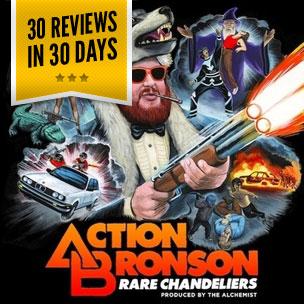 Thanks to online word of mouth recognizing an immense talent accompanied by a similar frame, Queens native Action Bronson has sprinted to the underground’s forefront not even two years since his debut album Dr. Lecter. One of the scene’s more dedicated newcomers, this visibility stems from the merits of a strong work ethic, staunch determination to keep the tradition of sharp New York lyricism alive, and bizarre alliances such as freak shows Odd Future and Riff Raff.

Never leaving fans longing for more material, Rare Chandeliers is the latest in Bronson’s constant stream of releases, as he matches wits with 2012’s possibly most prolific producer Alchemist. Aiming to further the East Coast’s rather sudden resurgence heading towards winter, Action Bronson & Alchemist’s fusion on Rare Chandeliers results in heavy hitting hijinx easily overshadowing much of their present competition. The former professional chef-turned-rapper’s high pitched forceful delivery has steadily improved and his development into a kingpin of trash talk (examples including “Your boy as ill with the phonics as Gary Payton had the pill for the Sonics”) also stays equipped with humorous obscure references, giving a random shout out to actor Gerard Depardieu on the unorthodox three parter “Randy The Musical.” Likewise, “Dennis Haskins” taunts “Bring Mr. Belding out, that means you getting dismissed” (the Saved By The Bell actor being a real life comrade of Bronson’s). This and frequent mentions favoring prostitution only add to Bronson’s shockingly entertaining enigma.

Rare Chandeliers achieves its greatest success as Action Bronson and Alchemist seamlessly cater to young and past generations alike. “Modern Day Revelations” and the murky “Blood Of the Goat” have respective contributions from Roc Marciano and Sean Price (both fresh off recent full lengths). These collaborations and the ScHoolboy Q assisted “Demolition Man” establish Bronson’s versatility as a continual asset. While generally no stranger to misogyny, “Bitch I Deserve You” is his ode to the Rap game, a creative highlight as is the jazzy “Eggs On The Third Floor” that becomes a one man old school cipher. In sum, the unpredictable wild card factor found throughout this project is sure to propel Action Bronson’s riveting albeit still new career to the next level.

Listen to Rare Chandeliers by Action Bronson and Alchemist