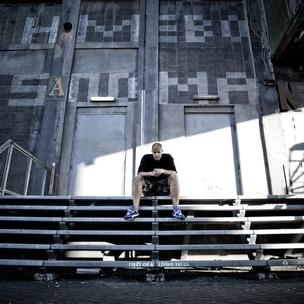 It’s impressive what Homeboy Sandman has compiled over the past half decade. He’s built a super solid reputation without conforming to the music industry’s rules of engagement. He’ll release songs with no hooks, deliver three verses in the short attention span era, rhyme about societal ills without pause, paying no mind to a radio format. In a sense, he’s an Original’s original. With his Stones Throw Records debut, First Of A Living Breed, The Good Sun continues to rebuke convention.

The Queens-native’s name is more known than ever and it’s showing in his rhymes. “Now you throwing salt ‘cause I’m exalted on a pedestal,” Sand kicks on the Oddisee-laced “Whatchu Want From Me?” – a roaming rebuttal to fraudulent politicians, relationship miscues, and the inevitable haters hating because he was “down to skip a meal or two.” On “Not Really,” he compares running alongside a river in Eastern Europe to running around the lake in Flushing Park, explaining how life after landing a deal isn’t all that different. As Sand sees it, “I still could be a bust / Same as it ever was.” This may be his Stones Throw debut, but HBS is no new jack. He’s already holstering two critically acclaimed LPs (Actual Factual Pterodactyl and The Good Sun) and a tsunami of goodwill from fans, friends, and rivals alike. So scathing bombast like “Eclipsed’s,” “Listen here, let me tell you something / All you suck!” smack like truth bombs since Sandy’s actually earned enough respect to flex condescension. In attitude, First Of A Living Breed reflects that.

Accompanying Homeboy Sandman’s evolved swagger are a plethora of perspective strapped stanzas. He’s as opinionated as ever – embracing didacticism without venturing into preachiness. The J57-produced “Illuminati” is the best example. Boy Sand spits from the position of the mysterious secret society, masterfully dissecting the macro and micro of population control:

“Create an enemy to hate / By then it won’t be tough / By then they’ll hate themselves so much they couldn’t wait / They’ll drown in booze that which they couldn’t take / And debt’ll make ‘em slaves / And then we cut the pay and lengthen days / Provide the drugs to medicate then cut the Medicaid…The sirs and madams will surmise / That it’s on us which they rely / They’ll never realize / That we rely on them / Any moment they decide, they can make it end / Instead just make some ends ‘cause life is hopeless / Times is hard / And keep them focused on religion so they’ll never look for God.”

Aside from sonic missteps like “For The Kids” (produced by 6th Sense, featuring Chace Infinite) – which sounds hokey despite it’s awesome message – and “Let’s Get ‘Em’s” (produced by rthentic RTNC) grating video game plops and blips that immediately incite a reach for the skip button, First Of A Living Breed is another powerful entry into the Good Sun’s discography. Convention be damned. Homeboy Sandman is still writing his own rules.