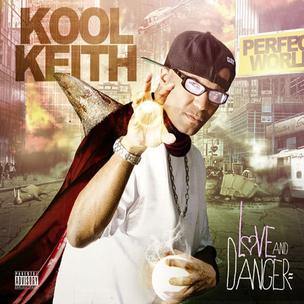 As the epicenter from which Hip Hop’s primary gatekeepers scrutinize the culture that has expanded far from humble beginnings, New York’s self-importance is equally questioned and justified. While some argue the Big Apple’s prominence has come and gone, diehard stalwarts fight for monumental originators to never be rendered obsolete. A leading figure of the revolutionary elite group Ultramagnetic MCs, Kool Keith, has preserved a solo cult following due to an endless well of creativity and zany humor spawning numerous characters and concept LPs for the greater part of two decades now. Rumored to coincide with his formal retirement from music, Love & Danger is yet another trip into the mind of Rap’s most beloved prolific madman.

With respect due to critical praise and esteem garnered from his craft routinely pushing the envelope, Love & Danger takes Keith Thornton’s shtick past reasonable comprehension as the album largely lacks any sense of normalcy. Completely produced by the relatively unknown DJ Junkaz Lou (a name reflecting the LP’s overall tone of obscurity), Kool Keith seems dead set on pretentious and ironic performance art rather than adding a prideful trophy to his extensive track record. Given an emulation of hipster monarch Diplo’s sound on “Cow-Boy Howdy,” the Trap-Rap leanings of “New York” and songs full of meaningless (freestyled) phrases strung together, probability leans towards the project being an elaborate inside joke that only he is privy to.

Continual awkward moments arrive with Kool Keith attempting to draw possible levity from the perspective of a racial oppressor on “Supremacy” and “Pull Your Hat Down,” his awkward spin on Southern Hip Hop. Impersonations of The Neptunes on “Something Special” and “Lovin Me” along with a general disregard for rhythm and staying on beat, and the purposely bad singing on “I Never Hurt You” are further indicative of an ongoing prank that comes to a halt with “Goodbye Rap” where he airs out festering gripes with the scene he originally helped pioneer.

This potential end to Kool Keith’s fabled journey may signal a far fall from grace, lending itself towards debate as to whether the emcee’s eccentricity renders him harmlessly out of touch or a self-saboteur. In the end, Love & Danger leaves a confusing stain on the veteran’s legacy and does little to strengthen the cause of loyalists with a vested interest in his haphazard easily misunderstood art.