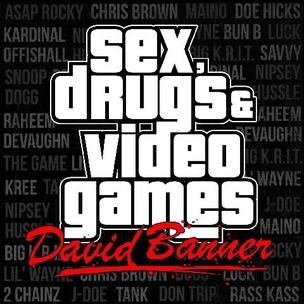 Hands up: who likes playing educational video games? Nope, didn’t think so. The equal mix of entertainment and education – Edutainment as KRS-One once called it – is the broad theme behind David Banner’s free album, which despite styling itself after the Grand Theft Auto series of games and running with a sensationalist heading, is meant to be the Mississippi rapper and producer’s theory on how Rap music and the mainstream media regurgitate and reinforce the topics of the title. Unfortunately, the virtuous attempt at a message comes across as confused.

To introduce the concept, the album is broken up by short skits involving a computerized female voice saying things like, “David Banner, would you let someone call your mother or daughter a bitch? If not, then why would you call someone else’s mother or daughter a bitch?” But, well, Banner has – and many times. And the album fails to respond to the question: As early as the fourth track in, “Yao Ming Remix,” A$AP Rocky is featured rapping, “Shorty dancing got a whole lot of ass on her/ If she don’t like a jiggy nigga, I’m a pass on her.” (The song also features the detestable Chris Brown, whose presence alone should be reason enough to pass over the project.) It’s soon followed by “Smoked Out,” a track about a wayward female featuring Bun B that offers nothing in the way of instruction or salvation – the message boils down to Hip Hop’s usual latent misogyny of pointing a finger and saying, “Eew, you have a dirty vagina.”

Conceptually, it’s not like the guests (which also include Snoop, Weezy and 2 Chainz) are used as a counter-point to Banner’s wider points. Despite taking literally years of really hard thinking to write lines like “Boom, I’ve been pumpin’ pussy like gas, nigga,” there’s no Slaughterhouse-style parody behind Chainz’s raps – it’s just more of the sort of stuff Banner’s meant to be calling into question.

The muddled direction of Sex, Drugs & Video Games means that Banner’s more focused moments – like the title track and “Malcolm X (A Song To Me)” – are lost among the mire. Instead of making his intended point, Banner’s only managed to reinforce the one he was rallying against.