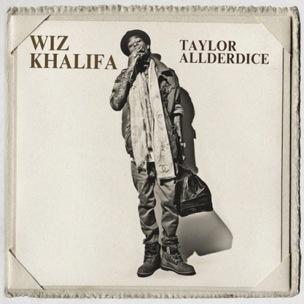 Stick with what you know. Wiz Khalifa adheres to this mantra on the new Taylor Allderdice mixtape. Taylor Allderdice is the rapper’s metaphorical return – after the poppy sabbatical that was Rolling Papers – and is underscored by many of the same producers (Sledgren, Cardo, Big Jerm) that helped him hone his signature sound in the past. Taylors can rejoice that their stoner friend is back.

Rose provides ancillary spoken vocals on “Never Been Part II,” a bright, synthy sequel to the Kush & OJ track, along with Rick Ross. Other guest verses are largely relegated to Taylor Gang affiliates and prove forgettable – Lola Monroe (“The Code”) – with the exception of Juicy J, whose several collaborations shine among the fray. The Spaceghostpurp-helmed “T.A.P.” is a pounding, druggy duet in which Wiz and J celebrate their shared predilections. “All my niggas straight drug addicts/ cause it takes one for you to know one,” Wiz raps gleefully on what’s a fresh interpretation of Three 6 Mafia. “Talking like this, I’ll be walking like this/Sold a few hoes and I bought a new bitch,” J adds. They tell addicts not to socialize with each other for fear of relapse, but musically at least Wiz and J are ideal for one another.

The after-effects of fame are glaringly apparent on Taylor Allderdice, perhaps more so than on Wiz’s previous efforts. Post-“Black and Yellow,” Wiz has upped the ante on the flagrant talk and braggadocio. “These niggas jealous I’m something they not/It’s all good/Shit, I expected that,” he raps flatly on “Nameless” to his detractors, yet unlike many of his young contemporaries, there doesn’t seem to be a much of a downside or even contemplation thereof. Wiz genuinely loves nouveau fame and relishes in his king-size rolling papers, spending “30 racks” on champagne and a wife with a “pornographic figure.” “When you living this high/you can’t be afraid of heights,” he raps fittingly on “My Favorite Song.”  The prodigal stoner, deservingly, takes his spoils.