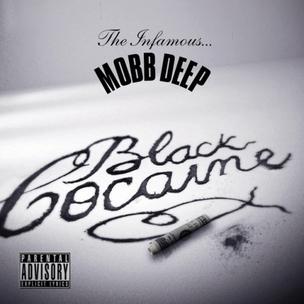 With the charts decidedly dominated by acts based outside of the Empire State, loyal listeners of New York City gritty Hip Hop this month turn their lonely eyes and ears to Queens as Havoc and Prodigy traffic the goods with the Black Cocaine EP, Mobb Deep’s first studio release in several years.

Five tracks might not be enough for rabid Infamous fans who have patiently waited for this event since Prodigy finished his prison term this past spring; but Black Cocaine soundly and efficiently serves its implicit purpose: to whet appetites until Hav and P drop their next long play. Heavy on threats, light on concepts, Cocaine delivers more familiar Mobb music, that which defined an era and provided the soundtrack to crime rhyme life in the Rotten Apple – especially in the outer boroughs. This bullet-train ride begins rather inauspiciously, though, with “Dead Man Shoes,”

a standard murder movement over plodding, militant drums. Bounty Killa appears for what simply feels like an uninspired hook (Cocaine is cut with these); it does not detract from the track, but fails to add anything to it.

finds Hav and P reuniting with The Alchemist, and it feels so good. Mr. Maman has a knack for bringing out the best in the artists with whom he works; and the dust-crown dynamic between the three is well known and appreciated. Smooth drums, killer keys and filthy verses – “Black Cocaine” is another example of a proper product born of the right rap relationship.

So it should come as no surprise that Al’s cinematic sound drives the EP’s strongest track, “Get it Forever.”

A seemingly reinvigorated Nas picks up the package, joining the Mobb for a dirt-infused diatribe crafted from the perch of a project park bench. It’s cold-hearted quality, and may remind some of past triple-threat gems such as “Live Nigga Rap” or “It’s Mine.” Their collaborative efforts often deftly depict the soulless nature of street life, but there is an undeniable sinister soul in every Mobb-Nas creation. The guitar-driven “Last Days”

wraps up this solid extended-play effort smuggled to murder music junkies by the pioneering tag-team from Queens.

While it does not harken back to the singular symphonies from The Infamous… or Hell on Earth – and no one will mistake it for those classic Mobb records – Black Cocaine is still raw in the right ways.

And so are the purveyors.