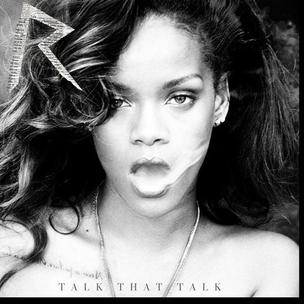 Rihanna has come a long way from her bubble gum pop start. She emerged from the abyss of second-tier R&B divas and became a bonafide rock star, dominating the market alongside an unstoppable King Beyoncé. With every dramatic haircut, she’s shed more clothes and inhibition, and her signature sound has become darker and moodier. She’s now cranked out 20 singles that have landed on the Billboard 100 Top 10 singles, faster than Madonna nabbed her slew of Top 10’s. Her sixth studio album, Talk That Talk, arrives just one year after the release of the uber-successful Loud. Although the assembly line timing may leave people wondering why so soon, it’s another solid collection, complete with radio hits, club bangers, and introspective ballads on her favorite subjects: love and sex.

It’s clear that Rihanna listens to the same music as the cool kids, from New York’s downtown hipster to the European night club raver. She swerves into M.I.A.’s lane with the album opener, “You Da One,”

as her monotone complements an island beat that nods Musical Youth’s “Pass The Dutchie.” The track is followed by “Where Have You Been,” one of her best songs to date. Once the Electronica beat kicks in, she glides over the song like some club kids rocking glow sticks. The party seamlessly continues with her hit, “We Found Love.” Although she sings of “yellow diamonds in the light,” the video for her single flashes scenes of a destructive relationship, with a platinum-haired love interest eerily resembling Chris Brown.

When Rihanna’s not talking love, she’s talking lust. She enlists Jay-Z for the album’s title track

. He seems like the only man able to match her bravado: “I sell out arenas, I call that getting dome.” She further proves why she was voted “Sexiest Woman Alive” by Esquire—and why Drake and J. Cole can’t seem to get her off their minds—on the all-too brief “Birthday Cake.” She leaves a blueprint of what she wants done to her body, but the track fades to black before she give explicit instructions. On the Bangladesh-produced “Cockiness,” she picks up where she left off: “Suck my cockiness, lick my persuasion.” She mellows the sexiness on the album highlight “Watch N Learn,” a sleeker version of “Rude Boy” with a Neptunes feel. Perhaps she’ll get some Star Trak love on her seventh album.

But even the baddest girls want love. On the Pop-Rock anthem “We All Want Love,” she sheds her sexy armor and becomes a girl writing in her diary. The track’s blaring guitar riff was made for a sea of camera phones waving in a stadium arena. She rocks with British super producer Jamie xx (who also produced “Take Care,”

her duet with Drake) on “Drunk On Love,” and even refers to herself as a hopeless romantic.

Talk That Talk is another blockbuster to add to Rihanna’s collection. Was it needed so soon after Loud? Probably not. It will delight fans and she will easily maintain her top spot. But RihRih might want to take a nap after this one, before her winning formula suffers exhaustion.