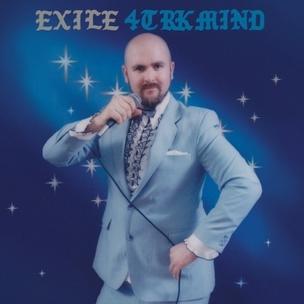 It’s difficult to tell whether Exile expects to be taken seriously as an emcee with his solo rapping debut, 4 Trk Mind. There he is on the album art, posing in a pasty blue suit rocking a ruffled tuxedo shirt underneath looking like a ’70s era game show host, landing somewhere between silly and satirical. There he goes at the end of the album’s scratchtastic opening track, “It’s Me,” tossing in a traveling carnival sounding drop at song’s end that states simply: “…Welcome to The Exile Manfredi Show, where you can see a hairy white guy rap pretty good.” He’s either playing around or copping a plea.

Sonically, this sixteen track offering is pristine. Whether it’s the disgustingly sick chops and soul samples on the minimalistic, “The Man,” or the futuristic growls and blippy intonations on the appropriately entitled “2039,” or the seemingly limitless sounds and songs and unrecognizable movie clips he effortlessly samples then seamlessly layers with his superior drum kit – 4TM is another reminder that, on the boards, Exile can do anything. But what else is expected from the audio genius that blessed Blu with Below The Heavens, Fashawn with Boy Meets World and that plethora of awesomeness along with Aloe Blacc (as part of Emanon)? The Southern California representer has been a top shelf beatsmith for years now. This album is no exception.

But rhymes wise, Ex is still severely limited. Most bars on 4TM eventually stray into shallow rappity rap land, where limp-wrist punchlines and eyebrow raising descriptions of his sexual exploits loiter too long, lacking imagination. “I got four balls, two dicks, and three sluts / One for the cunt / One for the butt / One to juggle three balls / The one that’s left you can suck,” raps Exile on “Klepto.” Word? “She was the little boy / And I was fucking Michael Jackson / In a red leather jacket / Yeah, I get my mack on,” he raps four tracks later on “Knight Rider.” Huh? Too often he sounds too amateurish, almost like freestyling with the homies on a long road trip and the vast majority of rhymes inevitably end up being about weed, women and whatever’s happening in the moment.

That’s not to say that 4TM isn’t without it’s standout mic moments. “2039” and “When Nothing’s Left”

(featuring Blu) are immediate winners. And joints like “Momma Song” and “Younger Days” visceral depictions of a disjointed family life growing up linger long after song ends. On the latter, Exile kicks nothing but realness when describing his relationship with his absentee father and the junior high school crush who dissed him after finding he needed free lunch. It’s the type of verse that hits home, even if he misspells welfare:

While those resonating moments don’t show up often, 4 Trk Mind is super solid in the background and, somehow, still entertaining in the headphones. Despite the vast amounts of lyrical mediocrity littered throughout, Exile deserves credit for holding down the album for fifty-four minutes with only two guest appearances. “I wanna be a rapper!” screams on “Wanna Be,” this album’s presumably sardonic conclusion. “I wanna be a fucking rapper! That’s right. I’m gonna fucking rap.” Whether he’s serious about the craft remains to be seen.