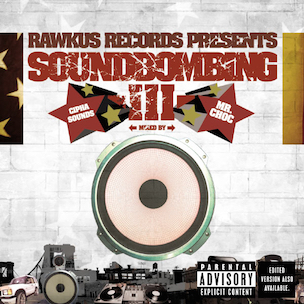 In 1997, Rawkus Records released a sampler album called Soundbombing that was billed as “The Ultimate Guide to Underground Hip-Hop.” And that it was. Mixed by Beatminer DJ Evil Dee, the album introduced the likes of Mos Def, Reflection Eternal, and Shabaam Sahdeeq to the hip-hop world, and is still regarded as a classic.

Rawkus released Soundbombing 2 in 1999, and the second album, impossible as it may seem, outshone the first one. This time, Beat Junkies J-Rocc and Babu mixed the album, and did one hell of a job. That volume featured ridiculously dope songs by heavy hitters like Dilated Peoples, High and Mighty, and Pharoahe Monch. Needless to say, heads were licking their lips in anticipation of what was next.

Well, here we are three years later, and Soundbombing 3, mixed by Cipha Sounds and Mr. Choc, has finally come out.

The familiar names- Mos Def, Kweli, Pharoahe Monch, Common, RA the Rugged Man, The Beatnuts, The Roots- are there, but overall the album lacks the punch that its predecessors did.

Mos Def comes weak with the electric-guitar tinged “Freak Daddy,” while the Roots inexplicably sing about lickin’ shots on the mediocre “Rhymes and Ammo.” Q-Tip also reaches a new low with the self-produced, and incredibly wack, “What Lies Beneath.”

There are some good songs here, Kool G. Rap’s previously released “My Life” for example, and “The Life” with Pharoahe Monch singing the hook for Styles P. But the even the solid songs have a jiggy quality that make the album sound more like a Funk Flex tape than a Soundbombing record.

The only real nod to the underground comes from RA the Rugged Man, who provides the album’s best track “On the Block (Golden Era).”

Yo Rawkus, where’s the J-Live, the Self Scientific? How about Krumbsnatcha, The Last Emperor or Blackalicious? All in all, this album will leave heads simply shaking theirs in disappointment.