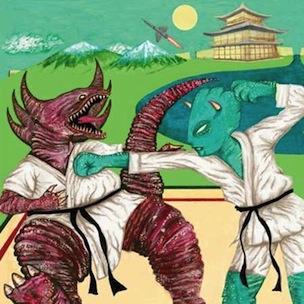 It would seem Ski Beatz can craft a beat for any emcee. Fact. After two decades of laying heat-rock like sheet-rock for everyone from Camp Lo to Curren$y, Roc-A-Fella to BluRoc — the “Dead Presidents”-producer is the exact opposite of complacent. Recent releases Pilot Talk I and II as well as last year’s 24 Hour Karate School personify his relentless progression. His latest, 24 Hour Karate School, Part 2 exemplifies his otherworldly range. It’s a 12-track sonic journey where no backdrop is too similar yet all perfectly mesh like practice jerseys. By production standards, it’s an impressive listen.

The second 24 Hours grinds in with “Metabolic” as Locksmith drops double-time rhymes loaded with quips like “In the pussy I’m a Wiz / No yellow streak” over Ski’s live drums and grimace-inducing guitar riffs. The blippy, futuristic “Moonwalk” sounds like high-speed Morse Code with a kitchen-table-ready-break-beat thumping in the background. That’s a good thing. STS’s nasally wordplay impresses again. The L.E.P. Bogus Boys and Terri Walker-assisted, “Looking For Me” is triumphant in the truest sense. Anthemic horns blaring. Hopping snares in the distance. It feels like a victory lap; like hoisting the Larry O’Brien Trophy after clinching Game 7. “Majesty” is easily the LP’s most rugged. Cassidy easily kicks the sharpest verse of the album, refreshing in their honesty and self-reflection:

“I don’t care about the gear that the boi buyin’ / I could care less about the jets that the boi flyin’ / I’m not concerned with the cars he copped / I wanna how much bars he got and if his bars hard or not…When you shine they pull you down like mini blinds / But I done fell and then rose again plenty times / I gotta fight for my position / Fine / I came into the business flying / But listened and now my vision fine…The Hustler ain’t sell no drugs in this rhyme / I ain’t catch a body neither / But I still got a fever.”

This audial diversity continues throughout Karate School with every beat sounding ready-made for each emcee. “Illegal”

featuring Stalley is passable despite an opening, head-scratching bar (“Before you Magics and Jordans did it…I flashed medals and rings”) that makes little sense, considering Magic Johnson snagged an NCAA championship and an NBA chip before Larry Bird. “Stop Frontin’” is impressive in the sense that it represents another production zone Ski breaks effortlessly (one hollow drum, a few bird chirps, completely minimalistic) and unfortunate in the sense that Tabi Bonney falls 40 yards short of interesting. And “You Already Know” is enough to incite curiosity in a Stat Quo and GLC extended collaboration.

There’s something special going down in Dame Dash’s DD172 SoHo studio and Ski Beatz is the conductor. The God-given ability to match rhymer to beat with seemingly limitless boundaries represents the Holy Grail for any producer. On 24HKSII, the sample driven producer shifts to live instrumentation while never sacrificing the essence of Hip Hop. Although the level of lyricism and the exciteme from high profile collabs of last year’s volume take a dip, there is still no ceiling to Ski Beatz’ range.