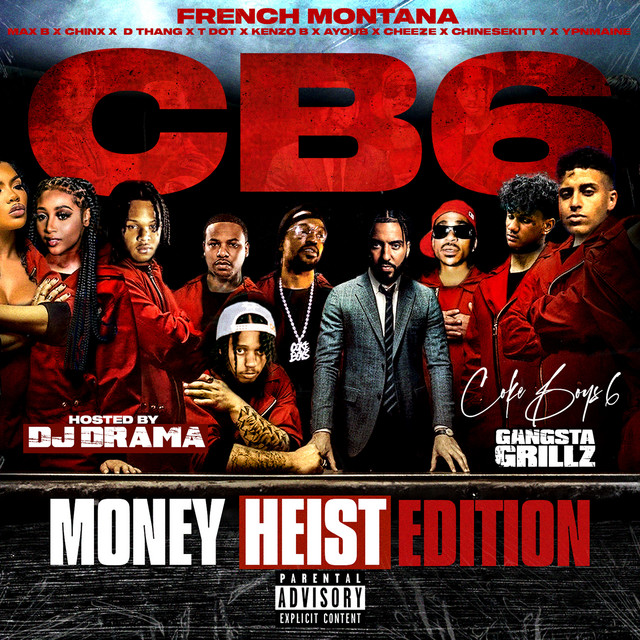 French Montana was always set on putting his people in position once he blew up. During his days grindin’ in The Bronx, he built a foundation off of his Cocaine City street DVDs that led him to creating Coke Boys with his crew. In its prime, the movement consisted of the originals Coke Boy Brock, Coke Boy Droop Pop, and Cheeze, adding Max B, the late Chinx, Flip, and Charlie Rock into the mix. The Coke Boys mixtape series was a chance to highlight these artists with French leading the way. If successful, the crew members who put in enough work could branch out with their own solo careers.

There are years worth of Coke Boy mixtapes, each representing a different era of French and the crew members who made the most out of the opportunity, like Chinx on Coke Boys 2 or Lil Durk on Coke Boys 4. The Coke Boys tapes attracted collaborators outside of New York like Rick Ross, Waka Flocka Flame, 2 Chainz, Wale, and Mac Miller, allowing French to take the Coke Wave worldwide.

On Coke Boys 6, French initiates a new year, same hustle mentality: create a nostalgic Coke Boys mixtape, make it a Gangsta Grillz with DJ Drama, and bridge the gap between the OG Coke Boys (Max B, Chinx, and Cheeze) and Coke Boys 2.0, introducing Dthang, T Dot, and Kenzo B alongside the crew’s extended family.

DJ Drama and French’s history goes as far back as 2009 with their Cocaine Konvicts: Gangsta Grillz, so their fresh return in 2023 sees them at different points in their career. Dram is in high demand with his hosting duties. French is back to making music with a gritty ambiance, sounding much more focused than before. Both understand the value of their platform and immediately utilize it to address the ongoing violence against the Hip Hop community on “The Oath.” French unearths another gem from Chinx as he raps, “Light a candle, say a prayer for the past homies ain’t no longer here / On the block where the homicides go down / Fast money never slow down / Cycle goes on and on like a merry-go-round.” Later in the song, French lists some of our “fallen soldiers” like Pop Smoke, Nipsey Hussle, and King Von before sharing his experiences of escaping death and surviving getting shot through the head. “A few make out expect for the chosen ones / You heard plenty songs, this the unspoken one,” French raps.

With Don Montega as the centerpiece of Coke Boys 6, the group just isn’t the same without Max B and Chinx. French has made it his mission to honor them on his albums and keep their names alive. “Not So Bad” comes from that emotional chamber, flipping Eminem’s “Stan” to an introspective track on paranoia and how “he won’t be straight with Max behind that wall.” It almost erases the memory of French’s “Whipp’n It Slowly,” a dope boy anthem remaking Fugees’ “Killing Me Softly With His Song,” because “Not So Bad” is how it should be done.

Without Max B and Chinx, it leaves space for Cheeze, who appears on four tracks, to really step up and fill the void left by them. Sure, Biggavelli does phone in with a recorded call from jail (“Max B Skit”) and appears on a wavy solo song (“Lemonade”), but the output of Max B’s unreleased music continues to dwindle until he comes home, which should be in April if reports are to be believed. The same goes for Chinx’s stockpile, whose CR6 project felt like forcing unfinished tracks together. It leaves Cheeze to play the role as the Sixth Man, dominating his performance as Cheddar weaves in and out of the intro with Stove God Cooks, and particularly shines on soulful tracks “Going Yeezy” and “Addicted to You.”

French has made a career of his celebrity connections, arguably the most popular rapper in terms of getting guest features and creating hits. Coke Boys aren’t established enough yet to keep Coke Boys 6 strictly within the camp, so French calls in A$AP Rocky and Smooky MarGielaa (“Chit Chat”), Rob49 (“Igloo”), Jeremih (“Choose You”), Benny the Butcher (“RZA”), Big 30 and EST Gee (“Free Smoke”), and Nav (“Fenty”) for some bigger looks. For once, French isn’t chasing the next chart-topper and it works in his favor by letting the streets dictate his song selections. French learned from Puff by jumping on the remix, which is why he feels at home on Vory’s “Project Baby,” King Comb’s “Can’t Stop Won’t Stop,” or Pheelz and Bnxn’s Afro-fusion sensation “Finesse.”

On “RZA,” he flips GZA’s “Shadowboxin’” as a metaphor for smoking on your Rushmore (a.k.a. Top 5) and competing with only himself. “I follow the OG, not the IG,” he claims. When French raps, “Jimmy Iovine in the scope / They ain’t happy we got rich, they wanted blood,” on the intro, he sounds completely over the major label system and ready to embrace his next phase as an independent artist.

Two versions of Coke Boys 6, one with 20 tracks and the Money Heist Edition with 29 tracks, came out simultaneously on release day. The extra nine tracks fail to add any redeeming playback except to make the album longer and bring attention to “Gang Gang,” a nod to French’s “Shot Caller,” with new signees Kenzo B and DThang. A poor lapse of judgment has Tory Lanez appearing on LGP Qua’s “Earned,” which seems like bad timing given the Megan Thee Stallion shooting trial. But for every intent and purpose, Coke Boys 6 is where the series needed to go next, putting French in the driver’s seat, presenting the Coke Boys artists instead of overstuffing the tracklist with superstar names, and keeping the Coke Boys collective hot until the Silver Surfer returns.