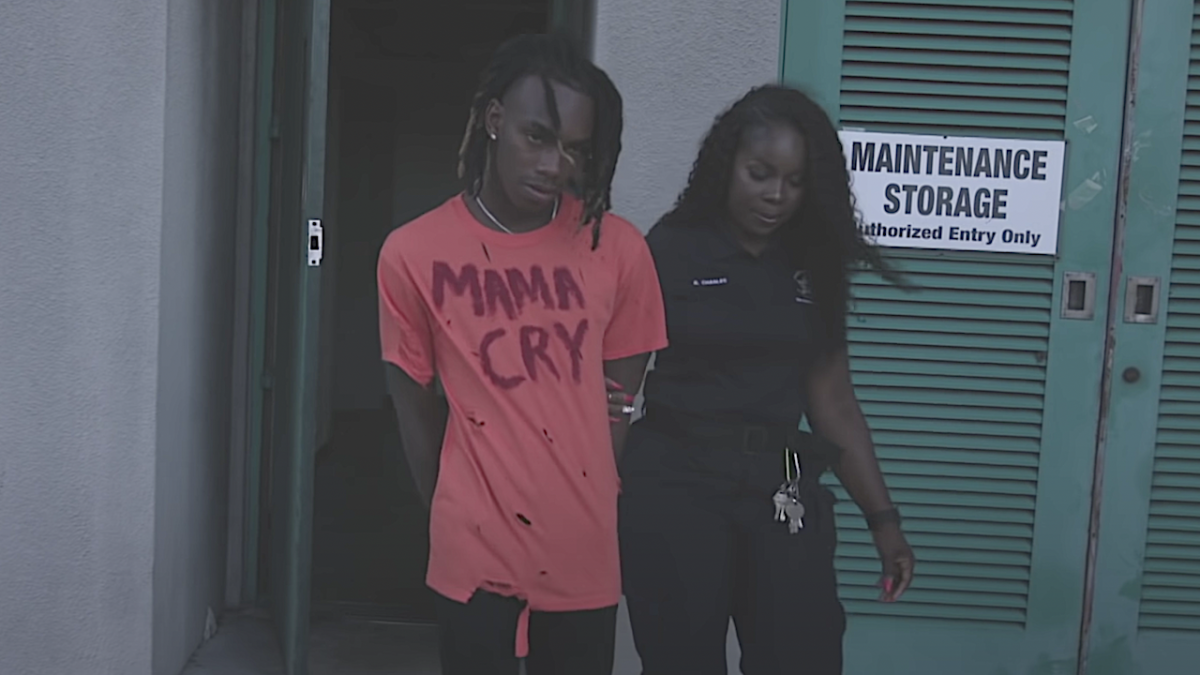 YNW Melly is calling on Meek Mill, Kim Kardashian, DJ Akademiks and United States President Joe Biden for help getting his phone privileges in order to speak with his family for the holidays.

On Saturday (December 3) the “Suicidal” rapper shared a pair of photos in an Instagram post along with a lengthy caption detailing the “Mistreatment and discrimination,” he has allegedly experienced since he has been incarcerated in Broward County, Florida following his 2019 arrest for allegedly murdering his two friends, Christopher “YNW Juvy” Thomas Jr. and Anthony “YNW Sakchaser” Williams.

In the first portion of the extensive statement, purportedly made by YNW Melly himself, Melly claims the abuse has been ongoing for years and proceeds to give the names of the correctional facility employees who have been involved in the alleged attacks on his person.

“In the picture taken over a year ago I am smiling, but as I speak to you from My cell at this very moment I am weeping in the present,” YNW Melly wrote in the caption. “I have been mute For years about the mistreatment, discrimination and misuse of authority mentally& emotionally abuse, I have been suffering and in fear B.S.O staff Captain Archibald Captain Hubert. XO Jean Baptiste and XO Jenkins are just A few names of high ranked staff that have enforced this treatment.”

YNW Melly continues, explaining how his phone privileges were originally taken away for a minor infraction while also claiming it has been several months since he has spoken with any of his connections to the outside world.

“On April 8th I was told I was not allowed to use the phone indefinitely (which mean forever) captain Archibald Revoked my calls for using another inmate pin to talk on the phone,” he wrote. “Usually when Someone get disciplined for this It is usually phone restricted for 30 days it is now going for 8 months, no other inmate in this jail is being treated this way. I haven’t spoke to family, friends, managers and accountants for months at a time making it impossible To pay my bills and take care of my house hold lively hood, or even talk to anyone for relaxation for pleasure and stress relief and worse to handle lawyer fees.”

He goes on to explain how crucial it is that he gets help to restore his only method of communication while he is behind bars by remarking on the upcoming Christmas holiday and his own mother’s birthday. “B.S.O is aware of this, I am being hidden from the world not hearing my family voices has mentally & emotionally tortured me into deep depression,” YNW Melly wrote. “This is entrapment I was never given a fair warning that talking on another inmate pin was wrong, the holidays are approaching not to mention my mother birthday is on Christmas Day not only is this torture to me its torturing them.”

In a final plea for help, YNW Melly delivers a call to action to multiple media outlets and celebrities while also maintaining his own innocence. “I am innocent until proven guilty and I have all rights to talk to my family, who ever took my privillages have a personal vendetta towards me, this is true mistreatment and discrimination plus pain and suffering and I cannot do my time like this Awaiting trial being secluded because of my celebrity status and my social media following Sheriff @bsosherifftony Please get on top of this situation Somebody please help me!! @saycheesetv @akademiks @nojumper @meekmill @kimkardashian @300ent @joebiden.”

YNW Melly’s future currently hangs in the balance as he could still face the death penalty in his double murder case if he’s convicted.

According to Billboard, a Florida appeals court ruled at a hearing on November 9 that prosecutors could actually seek the death penalty for Melly, real name Jamell Demons, despite the fact a state trial judge removed the possibility of the death penalty from the case in a July ruling siding with Melly’s legal team.

Florida’s District Court of Appeal overturned Judge Andrew Siegel’s summer ruling where he said prosecutors couldn’t use capital punishment against Melly because prosecutors “had failed to give Melly and his attorneys proper notice that they planned to do so.”

The appeals court believes that Melly and his legal team were given enough time since it put the death penalty idea out there when the “Murder On My Mind” rapper was originally charged in 2019, so the prosecution didn’t violate state law.

“We find that the state complied with its statutory obligations when it filed its notice of intent to seek the death penalty within 45 days of arraignment,” Judge Spencer D. Levine wrote when reinstating the death penalty option. “The fact that the state filed a superseding indictment, requiring a second arraignment, does not vitiate the already filed and timely notice of intent. Notice is notice.”

The death penalty provision in YNW Melly’s double murder case is expected to be heard by Florida’s Supreme Court at a later date this year.