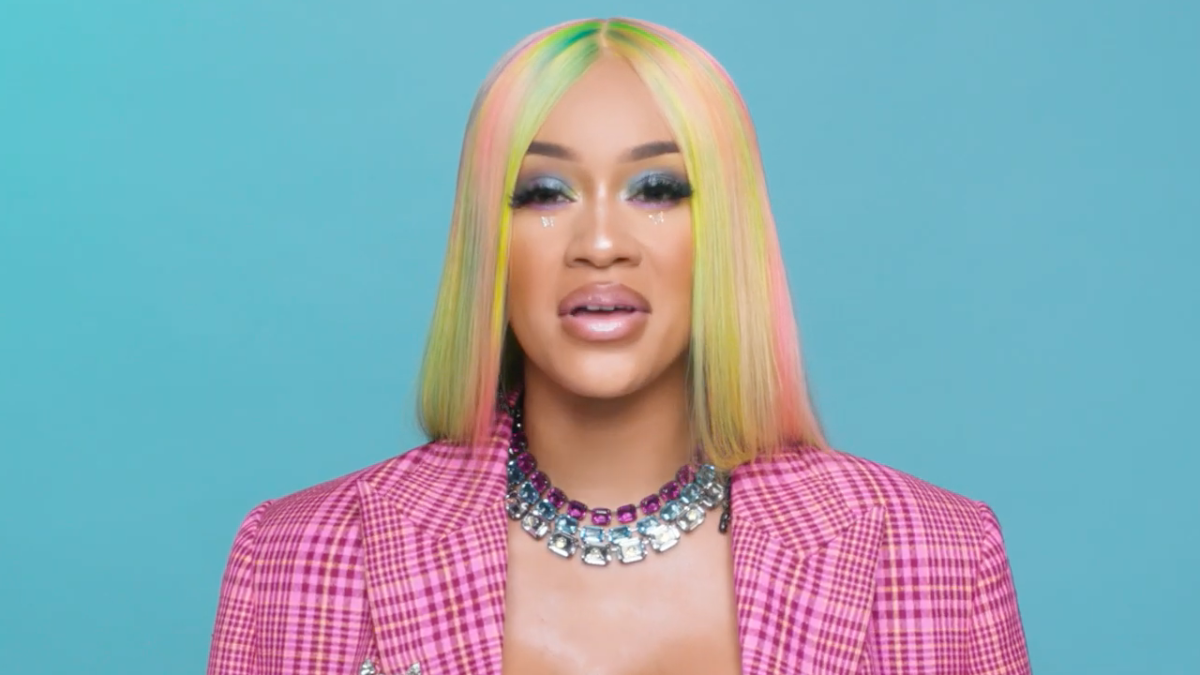 Saweetie believes women are running the rap game right now due to the prevalence of “violence and disrespect in male music.”

Sitting down on the Bootleg Kev Podcast, the California rapper claimed there’s a lack of “empathy and love” among male rappers while claiming female MCs are at the forefront of Hip Hop right now.

“I mean, L.A. and other cities, it just goes to show that this is the reason why women is running rap and Hip Hop,” she said. “Because there’s just so much violence and disrespect in the male music. You gotta think, like, remember, what was it, like ’16/’17, remember when like YG, Tyga, Chris [Brown], Big Sean, TeeFlii was out? It was fun, party music.”

She added: “It wasn’t like, ‘I’ma do this to you, and this, and this,’ you know? I feel like we gotta raise the vibration with the music and get back to having a good time. [I feel like there’s definitely a lack of] empathy and love, for real.”

Saweetie previously spoke about the female rappers that inspired her in a conversation with Issa Rae for Apple Music in 2021.

“My mom listened to a lot of Lil’ Kim and Foxy [Brown],” she said. “I’ve always liked their demeanor. I know that when they step into the room, you can just feel that boss-ness. They just always felt so powerful to me. Fast forward, I love me some Missy [Elliott]. I always tell people, if I’m gon’ get nasty, I’m gon’ get nasty like Missy ’cause she’s always creative and she’ll make you think.

“I love Trina‘s attitude. I love how comfortable she was in her own body. Then in high school, Nicki [Minaj] dropped two or three mixtapes that I just super loved, and it just opened my eyes to what a modern day female rapper felt like. Because everybody else — you know, my aunties and mom — was listening to them, but I discovered Nicki on LimeWire.”

When it comes to female rap beef, Saweetie said at the time: “To be honest with you, I don’t believe it unless I hear it from their mouth. I just think that we have to sift through fake beefs or people or blogs trying to create something that’s not there. And I think we’re all starting to realize it’s not the other person — it’s just social media. That comes with a territory, but unless someone tells me themselves, I don’t believe it.”

During an interview with The Forty-Five in 2020, Saweetie spoke passionately about the heavy scrutiny that female artists face.

“What people don’t understand is, when you’re a female artist you’re constantly critiqued,” she said. “You’re critiqued for your music, for your body, for your appearance in general, for the people you may be dating – you’re just critiqued non-stop. I had to realise that what the critics say is not real life, and that the industry is a playground.”

She added: “I know who I am as a person, and I know what I have to offer and I know what my value is, but it’s still hard sometimes. When you’re reading comments all day, it’s just like, ‘Oh my gosh, y’all know I’m a human, right?’”

Saweetie is fresh off the release of her latest project, the six-track Single Life EP, home to female empowerment anthems like “Bo$$ Chick” and “P.U.S.S.Y. (Powerful, Utopia, Supreme, Sacred, Yummy).”