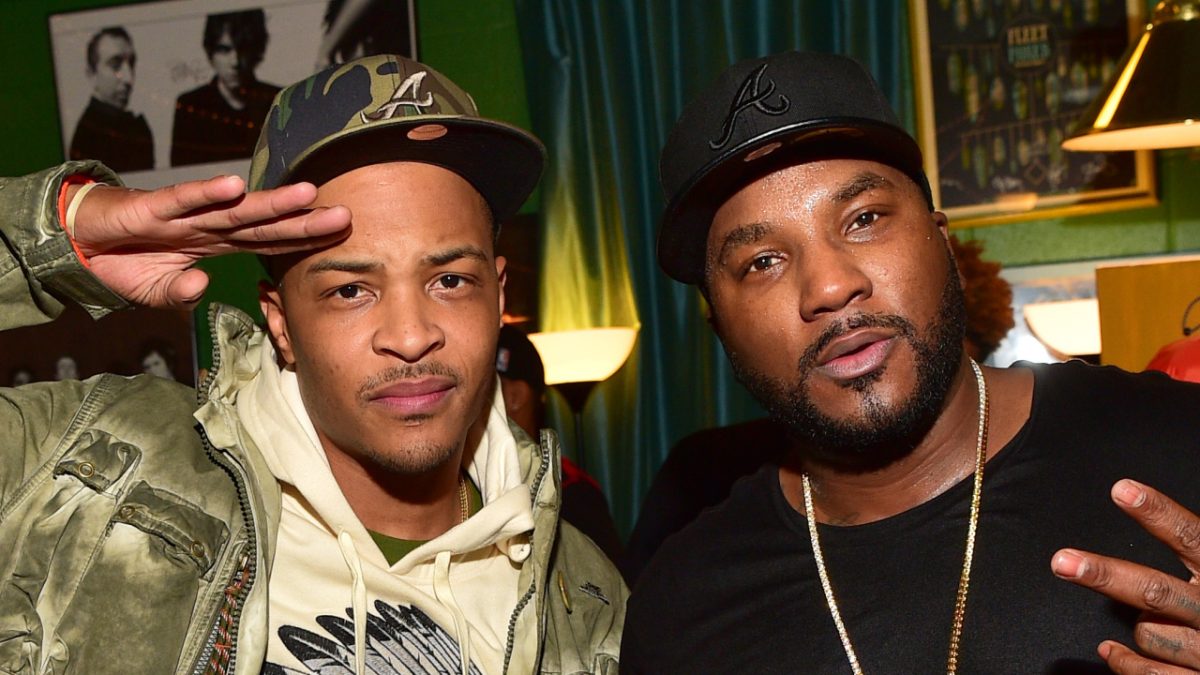 Jeezy Recalls T.I. Convincing Him To Quit Hustling: 'That Was A Real Wake-Up Call'

Jeezy is one of Hip Hop’s kingpins when it comes to coke rap, but if it wasn’t for T.I., he may have never left the streets behind to pursue music full-time.

During his recent Drink Champs interview, the Snowman recalled Tip pulling him aside in Atlanta’s famous Patchwerk Studios one day and encouraging him to stop hustling and instead focus his efforts on his burgeoning rap career.

“I’m working on Thug Motivation, T.I. comes to the studio. I’m doing my thug thing, I probably got about 2.5 in the booth sitting with me,” he remembered. “I’ll never forget, he looked in and was like, ‘Yo, let me holla at you for a second.’

“So we walked in the bathroom. You know how Tip is, he look under the stalls and everything like it’s G14 classified. And he goes, ‘Yo, you know you can’t do both, right? … You’re talented, you’re gonna blow at some point. If you continue to do what you’re doing, I don’t know how it’s gonna work out for you.'”

Jeezy continued: “I looked at him and said, ‘Well, shit. Don’t you do both? ‘Cause you the Rubber Band Man.’ He’s like, ‘Hell nah! I left that alone a long time ago.’ For me, that was a real wake-up call.”

T.I.’s words of wisdom came at just the right time for Jeezy, who watched his friends and associates get caught up in a federal drug indictment. Fortunately, Tip’s advice stuck with the CTE World rapper and helped him navigate that “dark time.”

“I remember shortly after that, I was having a lot of nightmares about, you know, trying to make it and this one last thing and then I got caught up,” he said. “I was losing a lot of weight because at the time Thug Motivation was coming out, everybody I was hanging out with started getting indicted and going to prison.

“It was a real dark time. I’m drinking, smoking, my mind ain’t clear, so I’m having a lot of mistakes. And I just remember T.I.’s voice in my head saying that.”

Soon after, Jeezy made the decision to quit the drug game for good, even if it meant leaving money on the table and facing the ridicule of his friends.

“I remember I had these two Nextel Chirps — the phones — and I rolled down the street one day and just threw them out the window, and I was done,” he recalled. “When I would see people in the street, they were like, ‘Yo, I owe you money!’ I’m like, ‘Nah, you ain’t owe me nothing. Keep that, live your life, I’ma do this.’

“It was so funny to people that I was really trying to be a rapper. You wouldn’t know how many homies laughed at me. I’ll never forget, when I got that first deal and when ‘Dem Boyz’ came on the radio, it was God, man … The minute everybody started getting indicted is when I started blowing up. I was like, ‘Damn, I’m supposed to be here.'”

Jeezy didn’t completely abandon the streets, however, as his drug past shaped early albums like Let’s Get It: Thug Motivation 101 and Thug Motivation 102: The Inspiration, which cemented him as a mainstream star.

“I’m not a carpenter, I’m not a mechanic, I’m not a roofer; I can’t tell you nothing about those things, but I am a hustler and I come from the streets,” Jeezy said of his lyrical content. “For for me, it was my truth. It was about survival for me. That’s all I really knew.”

T.I. has been more than just a big homie during Jeezy’s career. The Atlanta natives have formed a close working relationship over the years, teaming up on trap anthems like “F.A.M.E.,” “G Shit” and “Bang.”

There was even talk of the duo recording a joint album called Dope Boy Academy in the 2010s, but they struggled to get the project off the ground.

“Me and him threw a couple of things back and forth. He talked about an album, I talked about a movie, and we’ve just been back and forth about it ever since,” Jeezy told Billboard in 2017. “He wants to do an album and I want to do a movie. So if we can do a movie with a soundtrack, I think we’re good. [Laughs]“