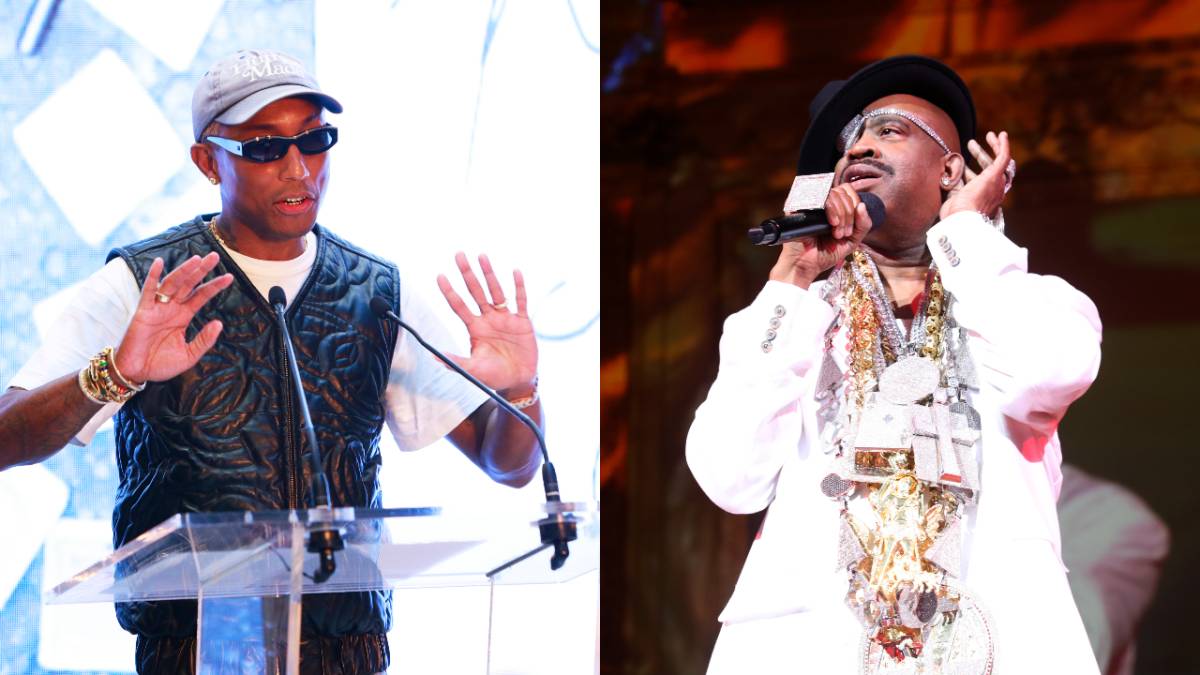 Pharrell Gives Slick Rick His Flowers At Joopiter Auction: ‘This Is The King

Pharrell has shouted out Slick Rick during his inaugural Joopiter Auction sale, and said he wouldn’t be where he was without the rapper’s influence.

In a video posted to his Instagram, Pharrell stood alongside Rick the Ruler and called himself a “crumb” compared to the Hip Hop royalty standing beside him.

Pharrell also posed for a photo alongside Rick and another big fan, Tyler, The Creator.

Pharrell isn’t the only chart-topping artist to give Slick Rick his flowers recently. Nicki Minaj did so back in March, revealing that Rick’s 1988 track “Mona Lisa,” from his seminal album The Great Adventures of Slick Rick, was the first rap song she ever learned growing up.

“Slicker than the guy w|da thing on his eye,” she wrote, referencing her Slick Rick bar on “Super Bass.” “If you only knew how much I love you. the 1st rap I ever learned was #MonaLisa. 1 day I rapped it to my mthr & when I got to the part about ‘a virgin?’ My mthr looked @ me like I lost my damn mind. I didn’t know what that meant.”

The Neptunes hit-maker first announced the launch of Joopiter in September, dubbing his first collection of items the “Son of a Pharoah” capsule. The set went on sale on Tuesday (October 11), and Pharrell had previously told the Financial Times that Joopiter was created to be an auction site that carries everything.

Joopiter is just the latest business venture Pharrell has announced this year. Earlier in September, he announced he’s currently in the midst of starting a new creative advocacy agency called Mighty Dream that will foster ideas to create products that help marginalized communities.

“It is probably the most important thing I’ve done in my 30-something-year career,” Lisa Osborne Ross, CEO of Edelman U.S., told Adweek. “As a woman and as a woman of color in my role and in this industry, it’s my very firm belief that businesses have not only the opportunity but also the responsibility to drive change.”

In June, Pharrell’s YELLOW nonprofit also linked with Cisco to donate educational tools and technologies to marginalized students who want a future in STEM or the arts.

Known as the YELLOWHAB “micro-school,” the program will be located in Pharrell’s hometown of Norfolk, Virginia, and will feature smaller classrooms and more hands-on workshops that strive to give students a more immersive learning experience based on skillset and not age.

“Let’s get rid of the old way of looking at children,” he told Rolling Stone. “Our kids are not in education only to get off in the summer because we need them to go work in the factories. That’s not the world that we live in. The paradigm needs to shift. The public schools don’t have all the answers and the private schools don’t either.”