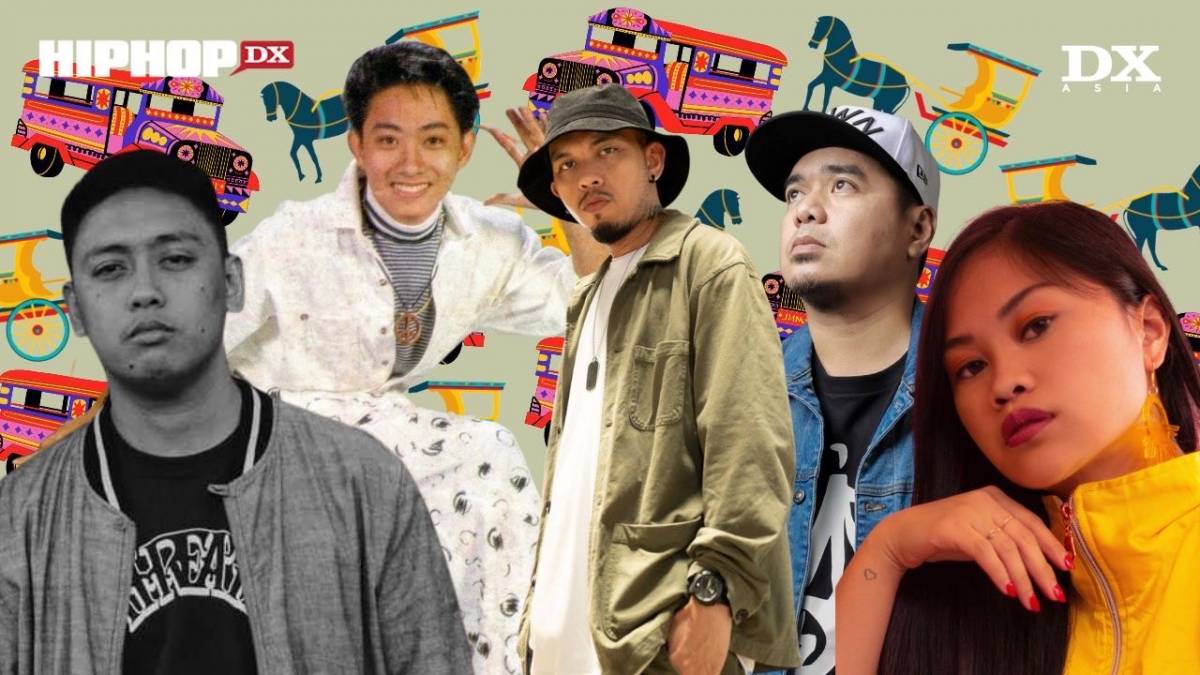 As a safe space for artistic expression and collaboration, rap music in the Philippines grew from being a borrowed culture from the U.S. to forming its own sound, form of expression, and identity.

Starting as an imported sound and practice—primarily by DJs and producers—from the Filipino-American and Filipino immigrant communities in the U.S., hip hop reached the shores of the Philippines in the ‘80s, with rap as one of its most appealing forms. Pinoy rap eventually became more and more incorporated into the everyday lives of Filipinos, providing an artistic platform that allows diverse stories to be shared, engages social and political commentary, and contributes to the overall Filipino identity.

Filipino rap proudly shows its cultural roots, from lyrical themes and fashion, down to its creative visual themes. What was deemed to be the first recorded Filipino rap is comedian George Javier’s “Na Onseng Delight” released in 1980—and considered as the first recorded Pinoy rap song—which was a comedic parody of the 1979 hit “Rapper’s Delight” by The Sugarhill Gang.

Comedy is one of the most popular genres of film and TV in the Philippines, especially during the ‘80s and ‘90s. The early iteration of Pinoy humor—particularly parody, insult, and slapstick, themes that have mostly endured to this day—was a common theme in the early decades of Pinoy rap, most notably made popularized by Andrew E., a DJ-turned-rapper who eventually ventured into acting in comedy flicks (many of which are based on his songs).

Andrew E,’s 1990 hit, “Humanap ka ng Panget” (Find Someone Who Is Ugly), [Editor’s note: a song that equates a person’s value and self-worth with their looks, i.e. settling for ugliness, which means or lesser value or low quality] which spawned a full-length movie the following year, was parodied by then-unsigned recording artist Michael V. with “Maganda ang Piliin (Ayoko ng Panget)” (Choose a Beautiful One, I Don’t Want An Ugly One). The parody single became a hit, which helped launch Michael V’s career as a comedian.

As times changed and Pinoy rap music gained more commercial success, its content evolved from containing problematic humor [Editor’s note: to say the least] into themes that dwelled on the variations of Filipino experiences and narratives. More and more rappers begin sharing their reflections on their personal lives—challenges and triumphs alike.

One example is FlipTop battle rap icon Loonie’s “Isang Jeep” (One Jeep), featuring the all-star ensemble of “Hiphop22,” with verses from Ron Henley, Abra, Apekz, Dash, Konflick, Jonan Aguilar, Klumcee, KJah, BLKD, Chi-nigg, Mike Swift, Puting Kalabaw, Rhyxodus, Smugglaz, and the late D-Coy. The song talks about how, as people, we are all navigating through life’s traffic and road bumps together. Part of the lyrics goes, “Magkakaiba man ang pinanggalingan lahat kami dito magkakapatid / Kahit gaano kahirap ang buhay miski papano makakatawid” (We are all brothers/sisters even though we came from different places / Difficult as it may be, we will go on with life in one way or another).

Pinoy rap also incorporates traditional Filipino values that emphasize close parental relationships and family ties in general. For instance, in 1096 Gang member Ghetto Gecko’s 2021 single, “Man!,” he narrates how he struggled on his own for success, guided by his parents’ advice, particularly in the second verse of the song. The verse mentions how his mother would wake him up, feed him, and tell him that it’s okay if his views are different so long as they bring him to a different life. To this, he tells both his parents to wait and see because he will achieve great things with his hard work.

Personal stories also are often used by rappers to mirror our collective desires. In Shanti Dope’s “Maya,” released last April, the rapper talks about seeking freedom and how the youth are the future of the nation, echoing the sentiment of the Philippines’ national hero, Jose Rizal.

Its music video contained various visual references to Filipino culture—past and present—including shots of kalesa(horse carriage reflective of the country’s colonial origins), Pinoys’ fondness for online gaming, the Filipino hustle, and how they popularly resort to online selling to make ends meet, and people’s love for celebrations—as evident in the country’s fiestas and extravagant parades.

With its growing expansion of socio-cultural themes, Pinoy rap contemporarily became known for its grounded and aspirational lyricism which is further promoted through modern rap battles that became widely popular for resembling the traditional balagtasan, a poetry-based approach for debating using verses.

The most popular and pioneering Pinoy battle rap conference in the country is FlipTop, established in 2010 by Alaric Riam Yuson (also known as Anygma). With over 6.92 million subscribers and over 2 billion views on its YouTube Channel, it is credited for featuring hundreds of homegrown talents, both in the underground scene and mainstream, as well as for the growing appreciation of contemporary Filipino rap both locally and internationally.

Rap—and hip hop in general—is known to be a space for creative freedom. Filipino rap has been embracing this freedom by engaging in socio-political conversations. One of the politically vocal rap artists in the country is Aristotle Pollisco, professionally known as Gloc-9. He addressed several national issues through hits such as “Kalye” (Street), “Upuan” (Seat), and “Dapat Tama” (Must Be Right).

Two of the more prominent issues in the Philippines, just as in any other country, are crime and corruption. Gloc-9 talked about crime in “Kalye” featuring Yosha, which was released in 2016. The song emphasizes how one should not forget the gruesome stories of the streets because they tell about the hardships of the people and how they united on the streets to fight for their freedom. This is seemingly in reference to the 1986 EDSA People Power Revolution, wherein millions of Filipinos from all walks of life marched in peaceful protest in EDSA (a highway in Manila) to successfully bring down the dictator Ferdinand Marcos whose regime was characterized by massive corruption and extrajudicial killings.

Additionally, Gloc-9’s political tracks also feature the 2009 hit song “Upuan” featuring Jeazell Grutas, which attacks the ignorance and entitlement of those who are in the seats of power. The artist also pushed for action beyond words by encouraging an informed election in 2013 through his collaborative song with GMA News Network, “Dapat Tama” (Must Be Right) featuring Denise Barbacena.

Most recently, rap artists headed by BLKD and Calix produced Kolateral (Collateral), a 12-track studio rap album about the administration of former Philippine President Rodrigo Duterte’s deadly war on drugs, which has since claimed the lives of at least 6,000 people, according to 2021 data from the government. However, various rights groups say that the number is much higher, with the death toll between 12,000 and 30,000, according to a report by the Human Rights Watch organization.

The album narrates several stories of the victims of extrajudicial killings through lyricism and audiovisual art that intensifies its socio-political commentary backed by two years’ worth of research and interviews of the victims themselves.

Artists are also active in publicly supporting politicians during elections. During the 2022 national and local elections, many rappers prominently and actively campaigned for presidential candidates. Gloc-9 performed at several of then-incumbent Vice President Leni Robredo’s presidential campaign. Robredo was the only female and leading opposition candidate, who was also the subject of online misinformation campaigns.

Meanwhile, Andrew E. supported and performed at the campaign events of Ferdinand “Bongbong” Marcos, Jr., the son of the ousted dictator and kleptocrat Ferdinand Marcos, who went on to win the presidency.

Apart from politics, Filipino rap is also known for being vocal about challenging social norms and promoting nationalism. The most popular and well-received anthem about Filipino Pride is “Mga Kababayan” (Fellow Countrymen), released in 1990 by Filipino King of Rap Francis Magalona. The song not only marks an era of nationalism after freedom from years of dictatorship, but it also calls upon all Filipinos and the youth to take pride in their identity, culture, and roots.

Rappers like Peaceful Gemini and Ruby Ibarra have also produced songs about being proud of one’s roots and embracing their identity. “Mariposa” (Butterfly) by Peaceful Gemini featuring DB Tha Girl was released in 2021 and talks about loving the Filipina skin and beauty. Similarly, “Us”, a 2017 track by Ruby Ibarra featuring her fellow Filipino-American female artists Rocky Ibarra, Klassy, and Faith Santilla from the album Circa91, screams Filipina empowerment.

In a 2020 interview, Ibarra talks about how her album narrates the Asian-American immigrant experience, although she did not consciously intend for it to do so initially. She also said that she saw “how male-dominated and machismo this genre [hip hop] was, and ultimately, how women are often pitted against each other”. With “Us,” she intends to create a song that would “capture the importance of sisterhood, as well as the power of our voices.”

From its beginnings in Filipino humor to its evolution towards socio-political activism, and eventually down to its inspirational agenda through the narration of personal stories and struggles, Pinoy rap has gone a long way to reflect the country’s values, culture, and beliefs. Its identity is shaped by the struggles and power of the Filipinos.

Beyond being a platform for self-expression, the genre itself became a call to action for Filipinos to protect their freedom. With its growing appreciation in Philippine society, rap continues to be a breeding ground for creativity, passion, and empowerment of the nation and its people.