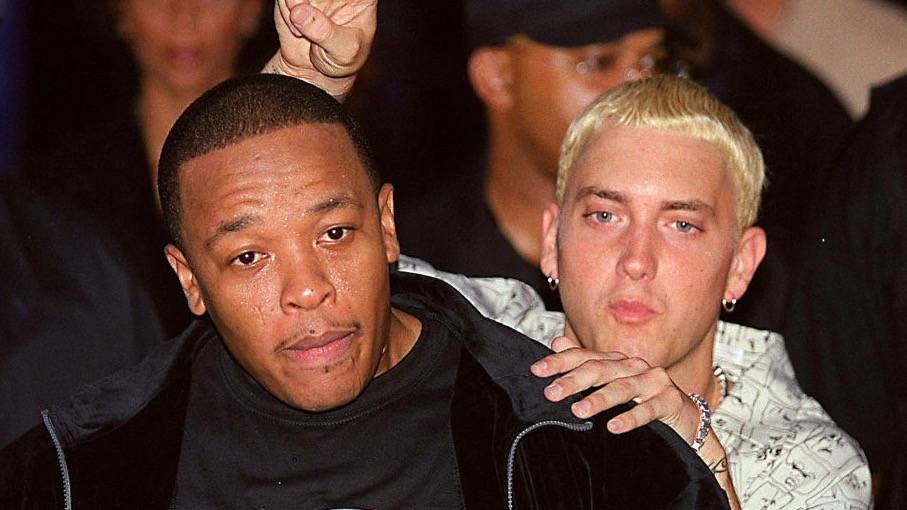 Eminem Forgot He Was In Dr. Dre's 'Still D.R.E.' Video

Eminem‘s memory looks like it might not be what it used to, with the legendary rapper recently forgetting he appeared in Dr. Dre‘s iconic “Still D.R.E.” video.

In a new clip promoting “From The D 2 The LBC,” his recent collaboration with Snoop Dogg, the pair reminisce about starring onscreen together in a variety of past projects, including the 2001 film The Wash and the video for Dre’s 1999 hit single.

However, after Snoop brings up Em’s cameo in “Still D.R.E.,” Slim Shady, looking puzzled, turns to him and says: “Was I in that video?”

“Yeah, you was running on the beach,” Snoop explains. “That was like your debut album.”

“I was?” Eminem replies. “Why the fuck do I not remember? … What the fuck? You gotta show me that shit ’cause I don’t remember.”

It isn’t until Snoop reminds him that he was running on the beach in his boxers surrounded by women that Em’s memory returns. “Ohhh yeah! Ok, ok. Now I remember,” he says, before revealing he was thinking of his performance in “Forgot About Dre” and couldn’t remember a beach scene.

Watch the exchange between Em and Snoop below:

“You killed it though, bro,” Eminem tells Snoop in a separate clip, to which Snoop replies: “You challenge me Marshall. You put me back in my karate school days, where I used to be a young MC and, you know, loved the challenge of having to try new styles and new cadences.”

“The rap game is supposed to be challenging; it’s supposed to make you dig in your bag,” he continues. “‘Cause I’ve heard you on other songs with other rappers and you tend to show out, so I wanted to make sure I was going to represent.” Eminem agrees, telling him: “You showed out.”

“From The D 2 To The LBC” is the lead single from Curtain Call 2, the sequel to Eminem’s record-selling 2005 greatest hits album. Due to arrive August 5, you can pre-order the album here.

Eminem has an estimated worldwide sales tally of over 220 million records with 10 chart-topping albums, which all consecutively debuted at No 1., making him the first artist to ever do so.

Curtain Call: The Hits is a compilation of the diamond-selling rapper’s biggest songs, including “The Way I Am,” “My Name Is,” “Guilty Conscience” and “Without Me.” As of 2017, it was the longest-running rap album in Billboard 200 history.