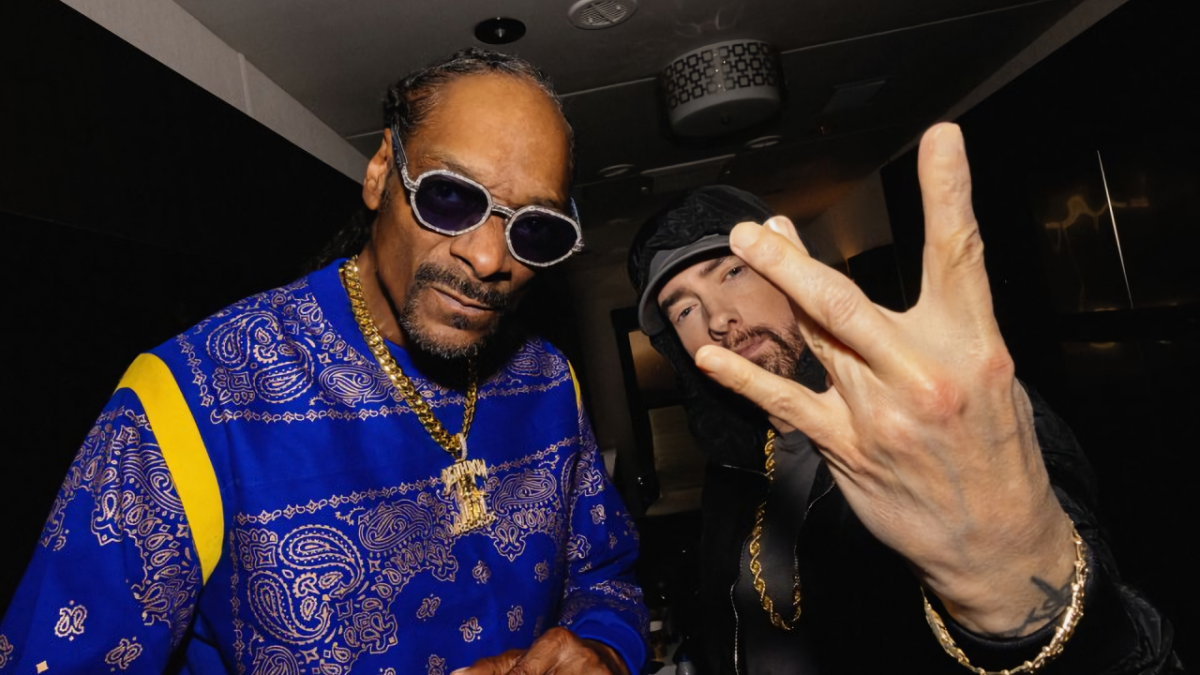 Par for the course, a handful of Hip Hop/rap singles arrived at midnight EST on Friday (June 24). But nobody was really expecting a collaboration from Eminem and Snoop Dogg — at least not tonight. Shortly after the magical hour, Eminem posted a tweet promoting a new song called “From The D 2 LBC” and its accompanying video.

He wrote in the caption, “Took too long to reconnect with @snoopdogg you know we had to make a movie! http://Eminem.lnk.to/FromTheD2TheLBC #FromTheDToTheLBC #curtaincall2 @BoredApeYC.”

The post included the single art, which boasted a comic book aesthetic and two cartoon monkeys intended to represent both Snoop Dogg and Slim Shady and their connection to NFT collection Bored Ape. He quickly followed up with another tweet plugging the video as well.

Took too long to reconnect with @snoopdogg– you know we had to make a movie! https://t.co/087W2OZJOI #FromTheDToTheLBC #curtaincall2 @BoredApeYC pic.twitter.com/k443JqXHON

Eminem and Snoop Dogg hit a little bump in their longtime friendship in 2020 after the D-O-Double-G failed to name his fellow Dr. Dre protégé in his Top 10 rappers list. Shady returned fire with a lightweight jab on the Music To Be Murdered By: Side B cut “Zeus” when he rapped, “As far as squashing beef I’m used to people knocking me/But just not in my camp/And diplomatic as I’m tryin’ to be/Last thing I need is Snoop doggin’ me/Man, Dogg, you was like a damn god to me/Meh, not really (haha)/I had dog backwards.”

Snoop Dogg replied with, “Pray I don’t answer that soft ass shit.” Eminem later explained it was Snoop’s tone that didn’t sit right with him during a December 2020 interview with Shade 45.

“Everything he said, by the way, was fine, up to a point,” Em explained around the 30-minute mark of the interview. “Him saying I’m not in his top 10 because there are some rappers in the ’90s I can’t fuck with…A: Him saying Dre made the best version of me, absolutely, why would I have a problem with that? Would I be here without Dre? Fuck no, I wouldn’t. The rappers he mentioned from the ‘90s—KRS One, Big Daddy Kane, [Kool] G Rap—I’ve never said I could fuck with them. I never said that.”

Less than year later, Snoop and Eminem were posted up at the studio working on new material, which Snoop confirmed when he took over Shade 45 for an interview with his Mt. Westmore brethren Too $hort.

“Everybody’s solo song was the last verse of the song before that, except the one with me and Eminem,” he explained. “Because I felt like that was like a big reveal. When n-ggas hear that Eminem on that muthafucka, that’s just a whole other level.”

DJ Whoo Kid shared the clip to his Twitter page and appeared to confirm the collab with, “That new @snoopdogg and @eminem is coming soon.” And it looks like Hip Hop fans just got it. Check out the visual component below.