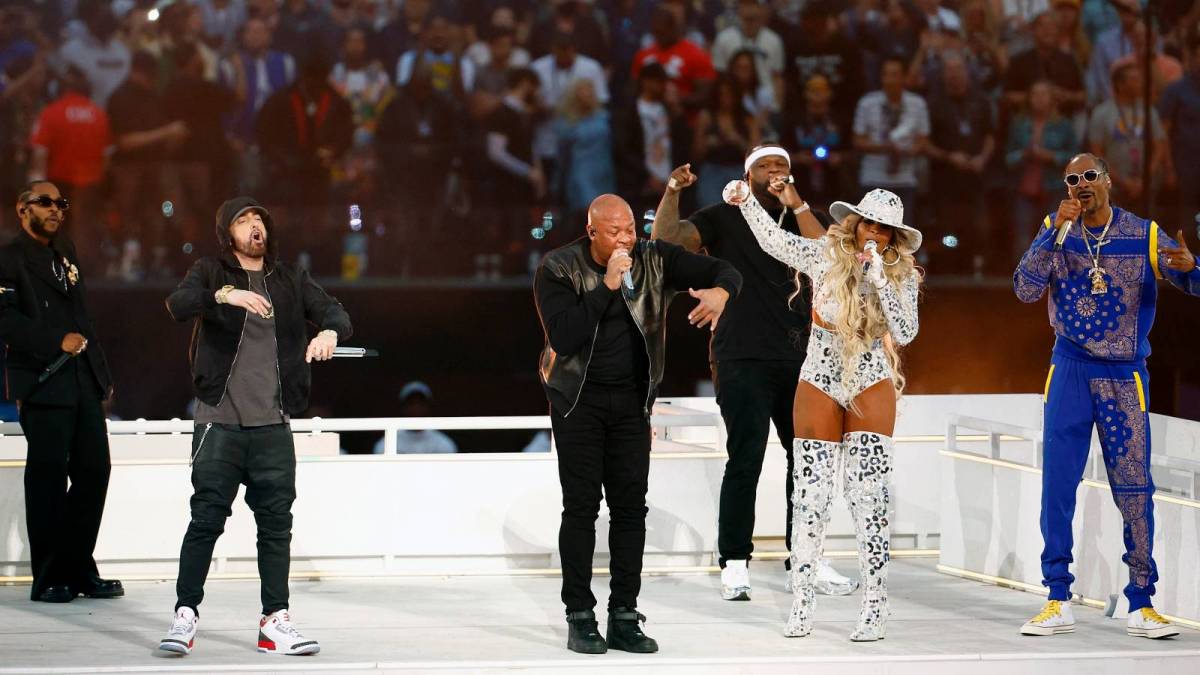 The highly anticipated Super Bowl LVI Pepsi Halftime Show took place on Sunday night (February 13) as the Los Angeles Rams took on the Cincinnati Bengals. But the L.A. Rams defeating the Bengals wasn’t the only win for Los Angeles.

Par for the course, the musical icons performed a medley of some of their biggest hits. HipHopDX has complied a list of every song heard throughout the roughly 12-minute performance. Check it out below.

Following “The Next Episode,” Dr. Dre and Snoop Dogg flawlessly transitioned into 1995 Tupac Shakur single “California Love” featuring Nate Dogg and Roger Troutman from Zapp and Roger. The lyrics only required a slight adjustment when Dre said he’s been in the rap game for “30 years” instead of “for 10 years” like he rapped in the original version.

Rumors 50 Cent was going to show up during the Pepsi Halftime Show hit the internet last week and sure enough, the Power mogul was on deck to perform his 2003 mega-hit “In Da Club.” Performing upside down as a gaggle of dancers pranced around him, 50 Cent was able to get the crowd amped up right before Mary J. Blige took her turn.

As predicted, Mary J. Blige performed the 2001 classic “Family Affair,” which was co-produced by Dr. Dre. Taken from the No More Drama album, Blige’s fifth studio effort, the song peaked at No. 1 on the Billboard Hot 100.

With notes of Tears For Fears’ “Head Over Heels” lingering in the background, Mary J. Blige then performed “No More Drama” from the 2001 album of the same name. The track peaked at No. 15 on the Billboard Hot 100 at the time of its release and No. 9 in the U.K.

Kendrick Lamar was up next and did a few seconds of 2012’s “m.A.A.d City,” which originally featured Compton’s Most Wanted rapper MC Eiht. Surrounded by dozens of male dancers wearing “Dre Day” sashes, K. Dot delivered his verses before quickly moving on to “Alright.”

Kendrick Lamar’s Super Bowl performance was primarily dedicated to “Alright” from 2015’s To Pimp A Butterfly. The track received four nominations at the 58th Grammy Awards, including Song of the Year, Best Music Video, Best Rap Performance and Best Rap Song. It wound up winning in the latter two categories.

Unsurprisingly, Eminem also performed the Oscar-winning single “Lose Yourself” from the 2002 8 Mile soundtrack. The lyrics of the song perfectly lined up with the momentous occasion as Eminem rapped, “You only get one shot, do not miss your chance to blow/This opportunity comes once in a lifetime.”

The song served as Slim Shady’s first No. 1 single on the Billboard Hot 100 and has crossed one billion streams on Spotify.

While Dr. Dre didn’t play much of the song, the veteran maestro sat down at the white baby grand piano to rattle off a few notes from the 1996 2Pac single “I Ain’t Mad At Cha” from All Eyez On Me, the late Hip Hop legend’s fourth and final album while he was alive. At the same time, Eminem took a knee in honor of Colin Kaepernick’s fight for equality.

The Pepsi Halftime Show ended with the 1999 Dr. Dre single “Still D.R.E.” featuring Snoop Dogg. With Dre still on the piano, he tickled the black-and-white ivories with the beginning of the song as Snoop Dogg re-emerged to spit alongside the Doctor.

While Snoop Dogg didn’t light up a blunt like many had hoped, Dr. Dre was able to rattle off the line “still not loving police,” which felt like a moment in itself. Watch the full performance here and find a special Pepsi Halftime Show mix from the official DJ for the Winnipeg Jets, DJ Fin-S, here.