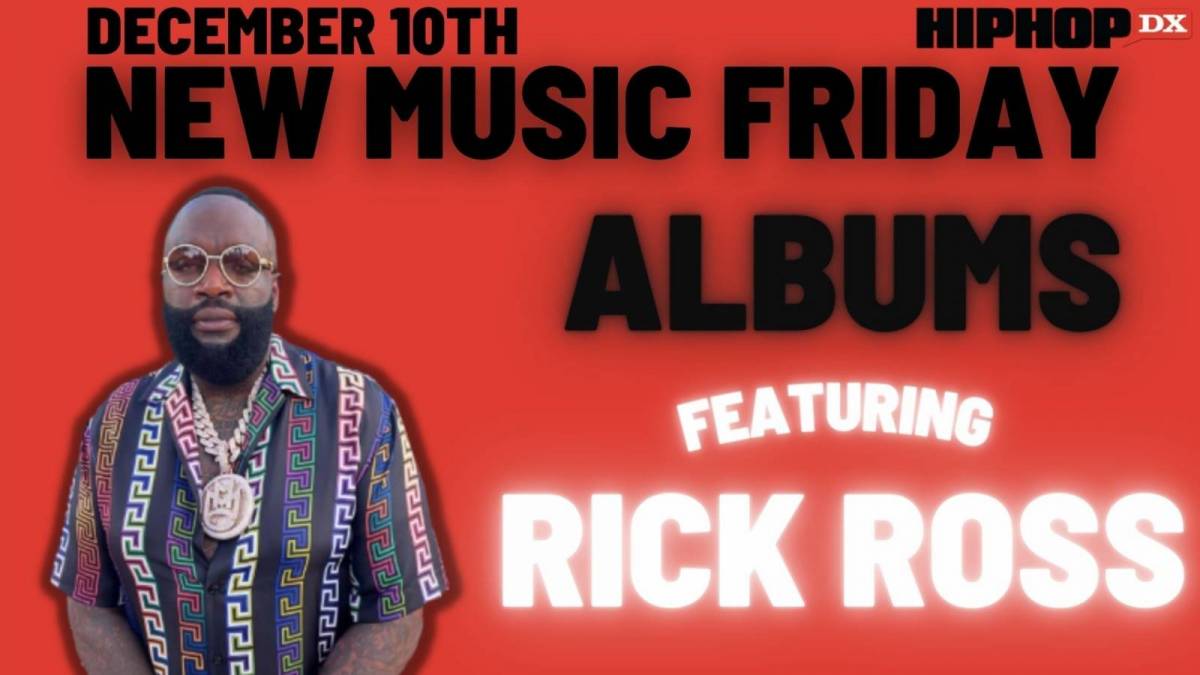 The weekend is almost here and that means its time for another edition of New Music Friday, a roundup of the best new albums which dropped on the week ending on Friday (December 10).

In the first full week of December, fans were lucky to receive new projects from a variety of artists including Rick Ross, Hotboii and Russ.

Fighting Demons, the latest posthumous album from Juice WRLD also dropped, as did The Big Sleepover from Big Boi and Sleepy Brown.

With fresh records from Pi’erre Bourne, Vado and Pivot Gang, there’s more than enough music to keep you satisfied as we approach the holiday season.

Rick Ross – Richer Than I’ve Ever Been

Rick Ross has never been a man for subtlety, a fact immediately apparent on Richer Than I’ve Ever Been, the Florida rap boss’s most recent offering.

Spanning twelve tracks, Richer Than I’ve Ever Been finds Ross working with an elite cast of supporting characters, from Benny The Butcher and Future to R&B artists such as Jazmine Sullivan and The-Dream, rapping about the lavish lifestyle earned through years of consistency in the music industry.

Juice WRLD’s somehow been gone for just over two years, yet his music continues to stand the test of time and make waves in Hip Hop’s broader landscape. Luckily, given Juice’s prolific work-ethic, the artist left behind troves of music, still being released.

The banner child of independent rap, Russ has come forward with his latest album CHOMP 2, a ferocious follow-up to his 2020 project. Flexing his dexterous bars, the “Losin Control” rapper flosses alongside artists including Ransom, Westside Gunn and Styles P.

Russ has always had a steady output of new music, but starting in 2020 the Atlanta-born rapper put his foot on the gas, releasing singles, albums and EPs in rapid fire succession. CHOMP 2 holds all the hallmark features of a classic Russ album: bars, vibed-out beats and clever flows.

After a few delays Big Boi and Sleepy Brown’s long awaited album The Big Sleepover has finally arrived. For his latest project, iconic Outkast rapper teamed up with Organized Noize’s Sleepy Brown for a star-studded celebration of collaboration which spans back decades.

Drenched in the sounds of funk and soul, The Big Sleepover sounds like a step back in time, to the warm tones of live brass and a deep bass line, all without sacrificing the music’s sense of freshness.

Florida Hip Hop has been heating up all 2021, and the scene seems primed for a breakout int the genre’s mainstream in the coming year. Led by acts including Yungeen Ace, Foolio and Hotboii, the contagious Florida delivery is becoming more and more popular, especially with the release of Hotboii’s latest, Life Of A Hotboii.

From the sounds of the 42 Dugg and Moneybagg Yo-backed “I Really,” to the intoxicating ATL Jacob-produced “Offset,” Hotboii is making the best music of his career thus far.

Pi’erre Bourne and TM88 are a match made in heaven. Pi’erre, who’s coming off an exceptional year with the release of The Life Of Pi’erre 5, meshes seamlessly with TM88, who also underwent a banner year, producing “Way 2 Sexy” for Drake’s Certified Lover Boy amongst other notable offerings.

Yo!88 combines the two artists’ fascination with ethereal synths, twinkling hi-hats and clever samples all while giving a platform for Pi’erre to capitalize on his current rap hot streak.

A Boogie Wit Da Hoodie is one of New York’s perennial artist. No matter when or what he drops, the five boroughs will pause to listen.

Such is the case on B4 AVA, the melodic rapper’s latest EP and his first release since last year’s Artist 2.0 and its accompanying deluxe. Moody love songs, crooning ballads and more make up the six-song project (plus a bonus song featuring Lil Durk).

Once you’ve explored the projects above, be sure to browse this week’s Honorable Mentions including PnB Rock’s new EP 2 Get You Thru The Rain, MadeinTYO and UnoTheActivist’s joint project Yokohama and Pivot Gang’s En Route (Deluxe).