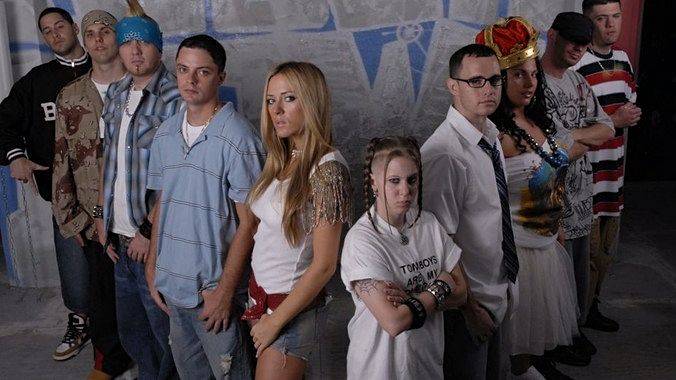 VH1 launched The (White) Rapper Show in 2007, a rap competition show hosted by 3rd Bass legend MC Serch and created by Ego Trip magazine. As the name suggests, the show consisted of 10 white rappers vying for the chance at $100,000 grand prize – all they had to do was be the best white rapper.

Friday (January 8) marked 14 years since The (White) Rapper Show first aired and Twitter decided to look back on it with a little encouragement from TIDAL’s Chief Content Officers and one of the The (White) Rapper Show’s executive producers Elliott Wilson. At the same time, Hip Hop fans encouraged Wilson to revive it somewhere, somehow. Some even suggested a 2021 version or special “Where Are They Now?” follow-up.

And the winner is… pic.twitter.com/a9YvEbY6CP

Dasit was the first contestant to be eliminated and as soon as he left Tha White House, he was ambushed by someone dressed as a giant cockroach wielding a large can of “Step Off!” spray that “Eliminates Wackness with Quickness.”

Several special guests appeared throughout the season, including Prince Paul, A&R Dante Ross, R.A. The Rugged Man, Fat Joe, N.O.R.E, Kool Keith, Just Blaze and even the Insane Clown Posse. In episode 8, John Brown and $hamrock battled it out for the grand prize and $hamrock ended up walking away the winner.

Tweet after tweet about The (White) Rapper show have flooded Wilson’s feed since he initially tweeted about it. Some people can’t believe a show like this even existed while others truly wish it would be given the 2021 update. Even Wale told Wilson to get it on Netflix.

YN u got to get this on netflix

Elliot u gotta find a way to get this to us. I learned about it later on but I was 8 when it aired so I missed it 😭 for the culture 🤞🏾 https://t.co/rnnthot3Ic

we need a where are they now https://t.co/XFmDRDaltP

What I liked about this show was first, it was hosted by legendary @MCSerch who kept it so real it hurt feelings, plus they brought in other hip-hop legends & pioneers to teach not only the contestants, but viewers about hip-hop history through challenges. Bring it to Netflix! https://t.co/oIbumRWNvq

Bruh this shit used to have me in tearssss😂😂😂 https://t.co/Gx0OOOz6Ox

Man I forgot about how cringe this show was. Bring it back. lmao https://t.co/BCu2hj8Pt2

I’ve never seen or heard of this before today and I’m honestly baffled it ever existed. https://t.co/SNMemTDqDn

This show was the best. https://t.co/dAXUofCZjN

They need to put this on Netflix https://t.co/NXOlYTC8Md

When is this coming to Tidel https://t.co/Op4HLU3e7b

This show was literally 🔥🔥🔥 https://t.co/fvEDTh01LR

I FUCKIN LOVE THIS SHOW JOHN BROWN WAS WAY AHEAD OF HIS TIME KING OF THE BURBZ https://t.co/jqAPluAjNh

bro elliot stay with the gems from deep in the dungeon 💀💀💀💀 https://t.co/NVbtD6yPJq

This show was the best. https://t.co/dAXUofCZjN