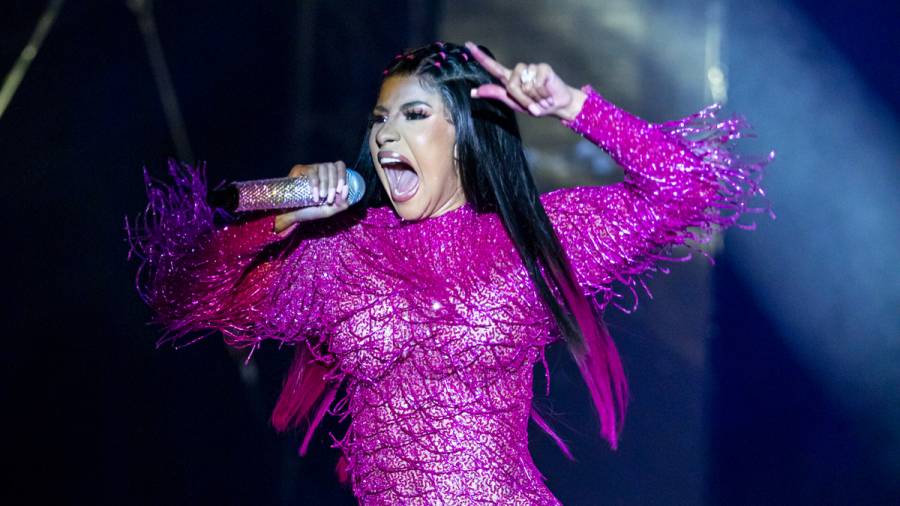 Cardi B & The Bardi Gang Engulf Twitter After 'WAP' Hits No. 1 On Billboard's Hot 100

Cardi B was understandably over the moon after her single with Megan Thee Stallion “WAP” debuted at No. 1 on the Billboard Hot 100 for the week ending August 13.

On Monday (August 17), not long after the news hit, the multiplatinum-selling rapper took her excitement to Instagram where she shared a video of herself screaming, “Good Fucking Morning” while showing off the latest stats.

“Thank you to my fans Megan fans,Thank you the world for listening .Im just soooo thankful I can’t even type it .Imma get like a bad bitch and tell ya later.Love ya WAAAAAAAP.”

Number fuckin one !!!!!NUMBER 1 !!!My 4th number 1 on @billboard hot 100….I’m just so thankful I want to hug the LORD !! Thank you soo much @theestallion .I don’t even know how to thank you ,I wish I can give you a big ass hug !!! Thank you to my fans Megan fans,Thank you the world for listening .Im just soooo thankful I can’t even type it .Imma get like a bad bitch and tell ya later.Love ya WAAAAAAAPP

As reported by Billboard, “WAP” racked up over 93 million streams, the most for any song in its first week. It surpassed Ariana Grande’s previous record of 85.3 million for the song “7 Rings,” which was set in February 2019.

“WAP” serves as Cardi’s fourth No. 1 on the Hot 100 behind her 2017 breakout hit “Bodak Yellow (Money Moves),” Bad Bunny and J Balvin’s “I Like It” and Maroon 5’s “Girls Like You.” Meanwhile, Megan earns her second No. 1 following the “Savage (Remix)” featuring Beyoncé.

Needless to say, Cardi’s rabid fanbase – better known as the Bardi Gang — flooded Twitter with reactions to the historic debut to the point “WAP ON TOP” is currently a trending topic.

it's the way the girls tried so hard to pit megan against cardi in 2019 just for them to debut at #1 TOGETHER a year later 😭 WAP ON TOP. pic.twitter.com/hpZojc0KzV

WAP ON TOP. STREAMS NOT RADIO WHICH ALSO = NO PAYOLA. SO WHATS THE NEXT NARRATIVE YALL PUSHING😌??? https://t.co/rLuxY2Ieu9 pic.twitter.com/9s7iKYxLaU

Congratulations queens you deserve this #1 💖😘#WAP
WAP ON TOP !!!!! pic.twitter.com/6V2umtrsgo

cardi is taking ALL the records today ☝🏼 the biggest sales week of 2020, the next week she'll have the longest charting female rap album of ALL TIME, the first female rapper to score a #1 in different decades and the only one to debut with +900 points on the hot 100. – WAP ON TOP pic.twitter.com/sdP3A5RKTv

Cardi securing her fourth number 1 and Megan’s second with a hot song. Those high concept visuals that they both came up with together. GRAMMYS BABY. I WANNA SEE EM. WAP on top. pic.twitter.com/ih16Io484P

Bardigang & Hotties we finally did it WAP ON TOP 🥳🎶 pic.twitter.com/9nQUJ0w9CG

I'm so proud of Cardi and Meg.😭😍 WAP ON TOP pic.twitter.com/nxB38Phs7w

The B*tches are mad Cardi is winning
WAP ON TOP
pic.twitter.com/ylLA66g7CA

The baddest bitch was always going to win.
And the Baddest Bitch is CARDI B.
WAP ON TOP pic.twitter.com/90Mzlb6EAb