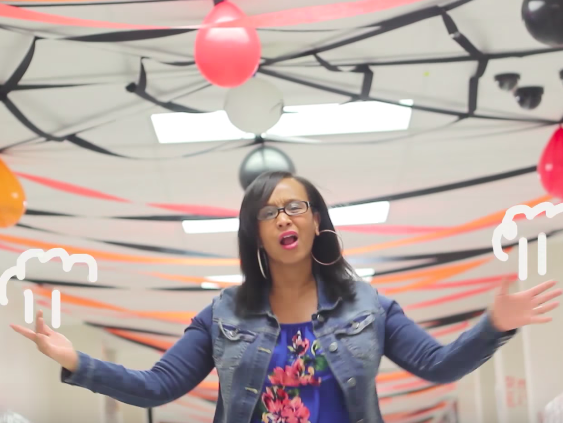 Spitting lyrics going about exponents, ratios and encouraging her students to do their reviews before taking a test, the rapping teacher’s song has gone viral since she uploaded the accompanying music video.

“I don’t want these kids to fail, I ain’t got no time to chill,” she raps.

In an interview with ABC 7 Chicago, the Joliet West High School teacher explains that rapping over the J. White beat is her way of connecting her advanced algebra and geometry curriculum with her students.

“I was able to speak their language to break down some of those barriers because I know a lot of my students in math, they struggle and they hate it,” Crim said. “I literally had a student tell me the next day, ‘You know what Ms.? I don’t like math but you doing this video that just inspired me to work even harder.'”

Crim recruited a friend to produce the video after she penned the rap. It was originally posted to Facebook and has racked up over 61,000 views at the time of publishing.

It’s not the first time a teacher has turned Cardi B’s breakout song into something students can get into. This summer, a teacher from Capital Preparatory Harlem Charter School went viral after remixing the hit into her geography lesson plan.

Rapped a map version of #BodakYellow for my babies today. pic.twitter.com/W9iJdzTtdP