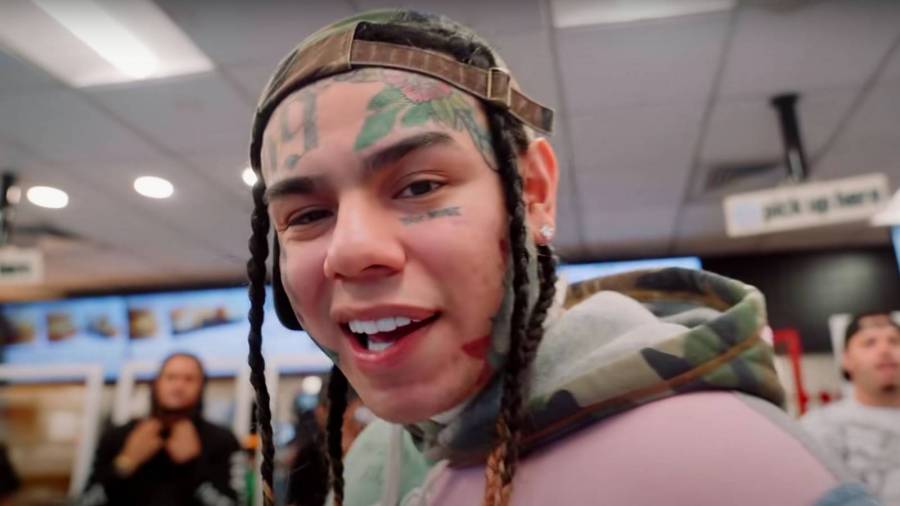 By now, anyone paying attention to the rap news cycle knows one of Tekashi 6ix9ine’s favorite hobbies is trolling. From baiting his haters to clowning industry figures such as Snoop Dogg and Meek Mill, his social media antics appear to know no bounds.

For 6ix9ine’s latest trick, he decided to act like he was assaulted in the streets of New York York where he continues to roam free after being released from house arrest. On Tuesday (August 11), the polarizing Brooklynite shared an Instagram photo of himself in a doctor’s office.

Rocking a blue surgical mask under his nose, 6ix9ine looked squeamish as the attending physician wrapped up his right arm in a bandage.

He wrote in the caption, “I got caught lacking in the streets.”

I got caught lacking in these streets :/

But according to a recent conversation with TMZ, 6ix9ine confessed he was only joking about “lacking” and proceeded to explain what actually happened to his arm. Around 3 a.m. Tuesday morning, 6ix9ine stumbled down the stairs in search of a late-night snack when he tripped over his one-year-old French Bulldog Poppy. As he attempted to break his fall, he wound up hurting his arm in the stairway banister.

Thinking it was only a bruise, he went back to bed but woke up in agony the following day. After the trip to the doctor, the X-rays revealed he’d actually fractured his wrist and will require a cast for the next three to five weeks.

The notion he’d been in fight isn’t exactly far-fetched. Last week, a man called out 6ix9ine to fight but ended up getting his phone snatched by security detail.

Some people have also been taking bets on how long 6ix9ine will survive now that he’s been released from prison and house arrest. Following the 24-year-old’s November 2018 arrest on racketeering charges, he almost immediately agreed to cooperate with the federal government, which is typically frowned upon in the rap community.

Not to mention, he testified against two members of the Nine Trey Gangsta Blood gang, Aljermiah “Nuke” Mack and Anthony “Harv” Ellison, during their trial last October and helped solidify their convictions.

Despite his “Snitch9ine” reputation, the “TROLLZ” rapper has been parading around the streets of New York and New Jersey. Most recently, he claimed “King of New York” once again during a packed mall appearance.