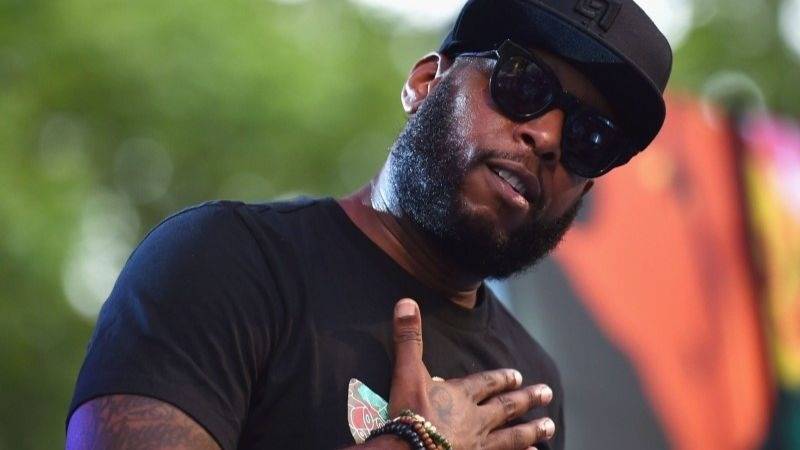 Talib Kweli’s reputation as a professional internet troll is nothing new, but it appears Twitter is finally catching on to his special talent — harassing women online. Over the past several days, the Black Star MC has been relentlessly going at a Black woman named Maya Monroe who inadvertently suggested he was a colorist.

Monroe then retweeted the response and wrote, “Literally almost all of them are married to light skinned women but that’s a conversation for another day.”

Literally almost all of them are married to light skinned women but that’s a conversation for another day. https://t.co/vW9QcsD3xa

Evidently, Kweli took issue with his name being included and fired back, reminding Monroe he’s married to a Black woman.

But from there, it just spiraled out of control. Kweli accused Monroe of tagging his wife DJ Eque — which was disputed — and cried victim.

Show the world where she specifically tagged your wife. You’ve made 100,000 tweets about Maya recycling the same screenshots but have yet to show her specifically tagging your wife, who I am untagging from this so she can have some peace.

Maya tagged Eque then posted several pics of another family member of mine. @moneyymaya posted wild assumptions about my personal life. When she did that, someone posted public info about her parents. Ain't no fun when the rabbit got the gun. @hautechicago @theforcebewith4 https://t.co/u9FuCUuxlm

And continued to tweet about me and accuse me of rape and try to stop me from eating. From behind a block. Like a coward.

Subsequently, Monroe revealed a woman named “Mary,” who routinely capes for Kweli, has been not only harassing her but also doxing her.

“This woman has over 100 accounts and has been posting pictures of my family, our address, my step mom’s old job and salary and our full names in defense of Talib Kweli,” she tweeted. “Leaked messages from her old accounts show her saying she is his paid employee. Please report her.”

As the Reflection Eternal rapper’s name continues to trend on Twitter, many people are calling for Twitter to ban Kweli along with the numerous fake accounts created by his “alleged paid employee,” which could be Kweli’s burner accounts — who really knows?

u only got this energy for women huh? 🥱 big strong man Talib pic.twitter.com/JZeZt9y4zs

Twitter needs to ban Talib Kweli and all of his fake accounts because the harassment that Maya has experienced this week is unacceptable! What grown man has enough time to be online SIX DAYS in a row to harass someone HALF their age? Over a tweet that was made in general… pic.twitter.com/ObFFCyqPDo

Why are black men not calling Talib Kweli in? Organize your ppl. He’s been harassing a black woman for days. This shit is not ok.

talib kweli shouting down a black woman online for 24 hrs coz she dared name black mens colorism in the industry. then sayin he wont check those men coz hes not into attacking other black ppl. bet he& his fake woke pals think he not misogynist & complicit either. another jcole.

Maya isn’t in any of the screenshots you posted talking to your wife. Also, when you stalk someone for seven days as you’ve down Maya, nothing is wrong with her brining up an article to demonstrate a pattern of abuse. Sue the person who wrote the article without dropping the suit

@UPROXX I can promise you the black women you commission to write for y’all can see where your priorities lie. Talib has been harassing black women for days. I will never write for y’all and will make sure folks don’t actively engage your pamtforms if this continues.

I don’t recall Talib Kweli putting this much effort when Iggy Azaela insulted him. I remember him being rather interested in teaching and explaining to her the roots of hip hop.

Guess the abuse and harassment is specifically for dark skinned Black women.

Please report & Block Lifecoach_Mary account. This person has multiple accounts and has been attacking @moneyymaya on the behalf of Talib. pic.twitter.com/LJqE21EOjs

please block and report @talibkweli and @lifecoach_mary for harassing maya for like a week now????????? pic.twitter.com/6Y52aCgbE0

Talib Kweli has been harrasing Maya Monroe, a Black woman half his age, for 3 god damn days all because his reading comprehension level is nowhere near as high as his raps lead us to believe. He needs to go.

Talib is taking Diabolic out of context as he does with everyone.
TALIB IS A MANIPULATIVE NARCISSIST who is mad Diabolic Shhmoked him in a battle.
Diabolic simply repeated what Heather Heyer's own mother said. pic.twitter.com/blP78Mltcm

Talib Kweli trying to find a creative way to harass a woman online every single day for the rest of his life because she had an opinion pic.twitter.com/7cgDyuA322

Talib Kweli has been harassing a woman half his age non stop for literally 3 damn days. Over a tweet that wasn't even about him specifically to begin with….. during the weekend of his side girl's babyshower. He paid bots to dox her and her family…

It has been 48 hours and Talib Kweli is still harassing a dark skinned Black woman who spoke out about colourism. I don't know if there's even a word for that level of misogynoir.

“Name the women I harassed and I’ll drag, dox, and harass you!” – Talib

Misogyny must of killed his brain cells 🧠 pic.twitter.com/YwDz29WFwT

Talib Kweli gotta be annoying as shit in real life for him to still be going in and none of his close friends, hell even celebrity friends ain't tell him how lame he looking at his big age

I am screaming. If Talib would have sat there and ate his food he wouldn’t be getting exposed as a cheater with a baby on the way. He’s all over sis page 🥴 pic.twitter.com/vYvGdfd0A9

Y’all I’m not about to blow up ole girl spot bc today is her baby shower. But talib has a wife, the one y’all keep tweeting, and whole other girl who is having his baby in like a month or two. The girl who is pregnant by him is the light skin one I’m referring to 🙃 pic.twitter.com/oEAVuMy0RB

Talib Kweli is currently doing a more blatantly petulant version of what J. Cole did a couple weeks ago…

It’s laughable that Talib Kweli is mentioning songs like “Brown Skin Lady” and “Black Girl Pain” to dispute claims about him being a colorist, when he’s been harassing a dark-skin, Black woman on Twitter for nearly two days now.