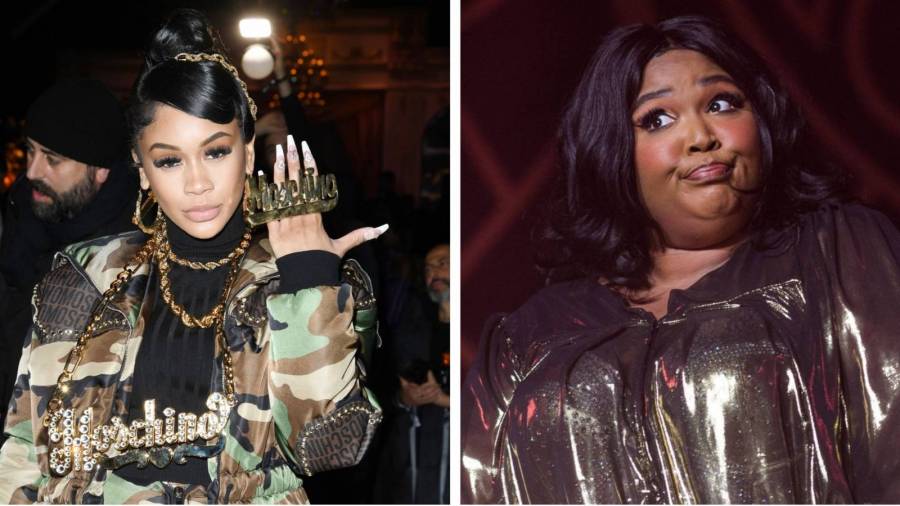 Saweetie became a trending Twitter topic on Friday (June 26) after she concocted a McDonald’s McGangbang on Instagram Live, a triple-deck sandwich consisting of two burgers and a McChicken.

As one would imagine, the sandwich isn’t exactly a healthy one — it packs a whopping 795 calories, 42 grams of fat, 66 grams of carbohydrates and 1,852 mg of sodium, according to the Nutritionix website. Coupled with the fries Saweetie threw on top, any health benefits from eating this monstrosity are minimal.

But it didn’t appear to matter when it came to the petite R&B singer shoving it down her throat, which quickly sparked a debate about double standards in the music industry. Soon, Lizzo’s name was thrust into the conversation with many people pointing out if she’d done something like this on Instagram Live, she’d be getting health advice from “internet doctors.” (Because, everyone’s an expert, right?)

Despite Lizzo’s vegan diet and exercise routine, she’ continually shamed for her outward appearance. Only two weeks ago, she put out a TikTok video of herself working out and was forced to defend herself once again, telling her fat shamers to “worry about [their] own god damn bodies.”

While some people came to Lizzo’s defense, others were simply disgusted she was brought into it at all.

So y’all throw #Lizzo into this stupid #Saweetie McDonald’s but if #Lizzo was eating that y’all would drag her harder than kids to school 🙄 pic.twitter.com/hH15pz7R6r

When you see #Lizzo trending because Saweetie eating a jumbo ass burger she made. Let the woman name rest. pic.twitter.com/WKssbzpipC

if this was Lizzo the men and some women would be like: pic.twitter.com/ICMT67e4d0

Y’all really have Lizzo trending because Saweetie are some big ass McDonald burger on live and y’all want to make a point???? Stop using this women in all discussions on what healthy looks like! It’s annoying AF! pic.twitter.com/PxjjvnaloP

Let’s see:
Lizzo stays getting bodyshamed 24/7 even when she’s vegan, works out and promotes body positivity
Saweetie here is basically showing off an unhealthy trait with this sandwich
I see a double standard https://t.co/4yPfuADX6R

y’all stay bring lizzo name up on here. nobody said anything about her until y’all brought her name up. saweetie just did something fun for live and y’all turned it into a think piece pic.twitter.com/uVNeLEKgNc

WHAT SAWEETIE EATING A MCGANGBANG BUGER HAVE TO DO WITH LIZZO?😒 pic.twitter.com/5w43IaosG6

Can somebody explain what in the flying fuck does Lizzo have to do Saweetie eat a McGangbang 😭🤦🏽‍♂️ pic.twitter.com/2zTDPIrVA3

WHAT SAWEETIE EATING A MCGANGBANG BUGER HAVE TO DO WITH LIZZO?😒 pic.twitter.com/5w43IaosG6

Lizzo trending because Saweetie ate a burger. Y’all act like y’all defending Lizzo by making her the poster child for fat people

Y’all: “I WONDER WHAT LIZZO THINKS”

Saweetie eating a mickey dees burger on live and yall making it about lizzo pic.twitter.com/Ptn8mYrA7r

Me and many other people don't care that Lizzo has nun to do with her. But luv we have the right to be mad at the double standard. What, it's okay for Saweetie to do if because y'all think she's pretty? The double standard….pic.twitter.com/CzoVZOHtfq

> Saweetie posts a video about a McGangBang

Why seeing Saweetie eat bring up Lizzo in your head???!?!?
Youre part of the problem
When watching this I see someone bored and wanting to do something w/ their food.
I’m not thinking of what everybody else would think if this was Lizzo 😐
Let her be
pic.twitter.com/Oj0ifcZSXs