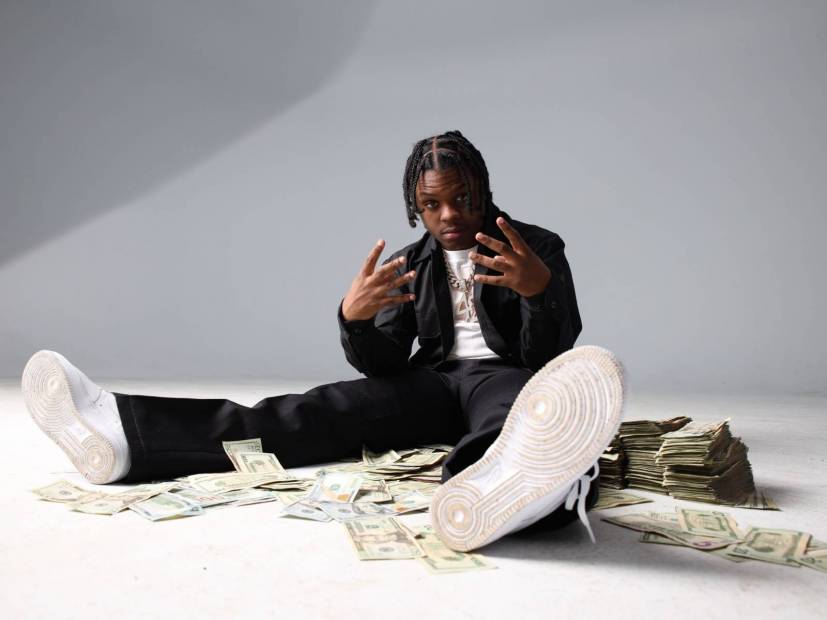 When it came to second chances, 42 Dugg knew he couldn’t waste any time whenever he got one. At the ripe age of 20 years old, 42 Dugg served a stint in solitary confinement while doing six years in prison for unspecified charges. To kill time while sitting in the hole, he taught himself how to rap out of sheer boredom. A year later, 42 Dugg found himself back in prison but with a mindset that had him focus on rap even more.

“I knew what the next thing I had to do was. Stay focused and stay out of jail,” 42 Dugg tells HipHopDX.  Once he was set free in 2017, 42 Dugg locked in on his craft. His first taste of a rap career came a few months after his release when he unleashed his breakout single “The Streets” featuring Babyface Ray. The track would eventually make its rounds and fall into the lap of Lil Baby, who took a liking to the up-and-coming rapper from the start. After building a connection with 42 Dugg through their love for dice games, Lil Baby recommended his music to Yo Gotti who also took notice shortly after. After hearing more of the budding talent in 42 Dugg’s rhymes, Gotti wanted to recruit him to his Collective Music Group label.

In March 2019, Gotti brought 42 Dugg onstage during the Detroit stop of Meek Mill’s The Motivation Tour and gifted him with a CMG chain in front of the hometown crowd. The moment served as a formal announcement that 42 Dugg was the newest addition to Gotti’s Collective Music Group through a joint venture with Lil Baby’s 4PF label.

To celebrate the momentous occasion, 42 Dugg dropped his studio debut, Young and Turnt, which boasted features by Lil Baby, Blac Youngsta and Peewee Longway. The project helped garner a solid buzz for 42 Dugg as it amassed over 30 million plays on streaming platforms and 50 million views on YouTube.

Fast forward a year later, and 42 Dugg is back to keep his momentum going. To kick off 2020, 42 Dugg earned on a guest spot on “Grace” off Lil Baby’s sophomore effort, My Turn. The track entered the Billboard Hot 100 chart at No. 18 serving as 42 Dugg’s first entry but not his last on the charts.

Thank y’all for Everything‼️‼️‼️‼️‼️‼️‼️vol 2 out everywhere

His latest studio album Young and Turnt 2 debuted at No. 39 on Billboard’s Top R&B/Hip Hop albums chart. The project features collaborations with Yo Gotti, Lil Baby and Babyface Ray with production by Southside, Cozmo Beats and more. “I feel like I’m still young and turnt,” 42 Dugg revealed to HipHopDX about his mindset with this album and his plans for the rest of the year. “There’s a whole bunch of shit to do and a whole bunch of shit to say.”

HipHopDX continued the conversation with 42 Dugg over the phone about Young and Turnt 2, growing up in Detroit, the hardest thing he encountered starting a rap career, how “Grace” with Lil Baby came together, what he’s looking to do with his career and more.

HipHopDX: You’re from Detroit and everybody knows the rich history the city has with music. What was it like growing up there and how does it feel knowing you’re possibly next in line to carry that torch for Detroit?

42 Dugg: It was real but I made it work. At least I feel like it was real. I think I went through a little bit more than what the typical muthafucka went through. Shit, I’m hoping I can carry the torch. I’m not going to say all that but I’m just grateful and everything. Hoping that I can be next because I ain’t playing with anybody.

HipHopDX: How did you keep yourself balanced as you say you feel you went through more than the typical person in Detroit?

HipHopDX: While you were in jail to pass the time you taught yourself how to rap. How did you do that?

42 Dugg: Ah, shit, I just, started rhyming words and see what I could put together. I was always a talking shit type of muthafucka. I had that down pat. I just had to make that shit all make sense.

HipHopDX: You constantly ran into trouble with the law at a young age. Was it hard trying to stay out of jail and going through that constant cycle?

42 Dugg: It wasn’t hard staying out of jail but it was hard staying focused on rap. First off, that shit doesn’t make you any money. I wasn’t trying to do something that wasn’t making me any money. If you’re not making any money, you’re lost.

HipHopDX: What was it like for you in the early stages of your career entering the rap game?

HipHopDX: How did you deal with going to another city and seeing people not rock with your music?

42 Dugg: Shit, I was like I knew I had to get better. I mean, not better, but I got to get this shit out here more. I got to make them feel this shit, that’s how I was looking at it.

HipHopDX: Talk about that meaningful moment in Detroit when you got on stage with Yo Gotti and got the CMG chain.

42 Dugg: Oh that was cool as shit. Ain’t nobody ever do that for me that is as big as Yo Gotti. So I really wanted to make the most of the moment. It was my first time performing on a big ass stage like that anyway. Gotti was like shit “you did good if that was your first time.”

HipHopDX: You’re signed to Lil Baby as well. How’d you link with him? I heard it was through a dice game and you took most of his money.

42 Dugg: [Laughs] Yeah we used to shoot dice and shit, that’s how we met and shit. We got really cool with each other. We just start shooting dice and was making money. I won’t say he was mad that I took his money, but you know what I’m saying? That’s my guy. I don’t want to seem like I was happy that he’s going to pay me.

HipHopDX: Can you talk about the “Grace” record? I heard Baby was sleeping during the process and he woke up when he heard you spitting your verse.

42 Dugg: Yeah. I started doing my verse but then I left and he sent it to me with his verse and the hook on it. I was like “damn his verse was hard, what the fuck.” He’s like, “Man, you got to get back on there.” I flew into town and shit and I got on there. Shit it was straight but everybody was telling me I had to go crazier than I did. I didn’t know how but I knew I had to go harder than that. So Baby was sleeping and I’m like alright let me lock in with this. What it really was, they were shooting dice in the other room and I was trying to shoot dice but then I thought fuck let me go back and do what I had to do. I went to that fucking studio room and I just got in my bag.

HipHopDX: Why did you sign with both Baby and Gotti when you could’ve just signed with one of them?

HipHopDX: What is the best advice that they have given you?

42 Dugg: They told me to take this shit seriously and to stay focused. They basically helped me overall to become a better rapper and a better person with everything.

HipHopDX: How did you come up with the idea for Young and Turnt 2? What made you want to come out with this right now?

42 Dugg: I ain’t drop in a year and my fans had to hear this shit. I had so many fucking songs.

HipHopDX: What’s the overall message that you’re trying to tell people on this album?

42 Dugg: I’m basically telling them to get in their bag. Get in your bag and keep working. Whatever it is you’re doing, this shit will work for you.

HipHopDX:  How did you want to make this project different than Young and Turnt?

42 Dugg: I mean, shit, turnt. Muthafucka put on a beat and I just went in. I really was just going there. I was also figuring this shit out. Like “Hard Times,” when I made that, I didn’t even like it. I was thinking to myself what the fuck was I even saying. I got to listen to it a few more times and I don’t even have the full song just a few verses. I got into it and I knew I had to finish this muthafucka.

HipHopDX: I know you’re planning on going on tour with Moneybagg Yo when this pandemic is over. How did that come together?

HipHopDX: I know you mentioned earlier that you said the hardest thing for you to adjust to was touring. What are some of the things you’re trying to do while you embark on this tour to get used to that touring life?

42 Dugg: I’m going to try to record more. Every time we go into a city the studio would be fucked up or something like that. But now I’m definitely trying to do that more.

HipHopDX: What’s something you learned from being on tour with Lil Baby?

HipHopDX: What are you looking to do with your new-found rap career? Now that more people are listening to you.

42 Dugg: Really jus letting people know who I am and what I’m about. Shit like that for real. I’m all right with all that. I don’t know maybe more but that’s what it is for now.

HipHopDX: When it’s all said and done, how do you think you’ll look back on your career 20 years from now?

42 Dugg: I want people to say I was a bad muthafucka. I’m not playing with these people and that’s going to happen soon. Real soon.

Follow 42 Dugg on his Instagram page @42_dugggg and stream his new project Young and Turnt 2 down below.