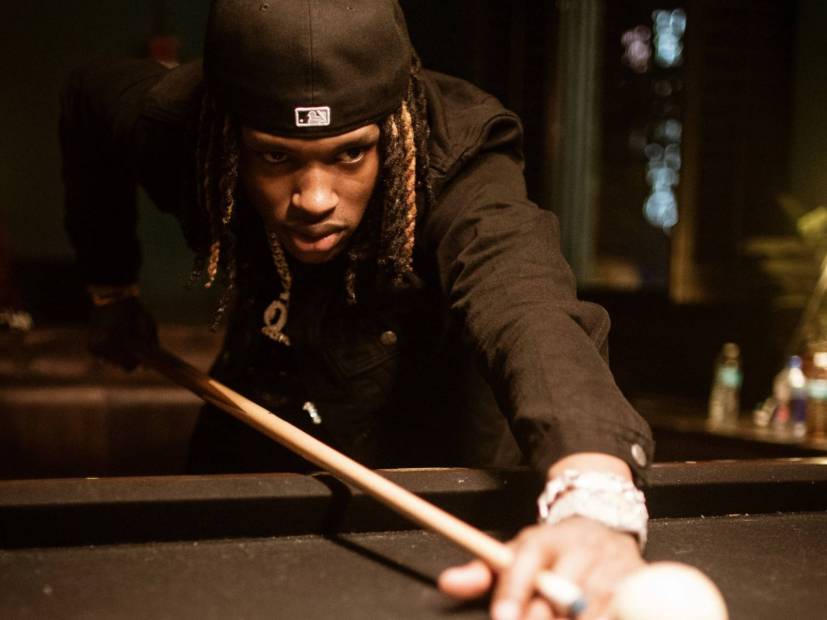 King Von was the newest addition to Lil Durk‘s Only The Family record label in 2018 when King Von proved his innocence and beat a murder charge that could’ve put him away for life. After seeing how close he was to losing it all, King Von made it his mission to leave his legal issues in the past and soak in all the knowledge he could from his mentor Lil Durk. He accompanied the “Homebody” rapper in the studio and throughout press runs to get a first-hand experience of what it’s like being a professional rapper.

Today, King Von is ready to step into the limelight as poised as ever. He has a new project out titled Levon James, and was a supporting act on G Herbo’s PTSD Tour — the first time his name has ever been on a bill. “I predict a lot of millions to be on the table and I’m going up from here, shit,” he tells HipHopDX as he dribbles a basketball in between his legs inside his green room. “We’re going to flex and go crazy but at the same time, it ain’t no shit,” he adds.

Joining forces with Lil Durk’s OTF label proved to be fruitful for the Parkway Gardens product as he burst on to the scene with a series of viral hits that included his 2018 breakout single “Crazy Story.” King Von followed that up with “Crazy Story 2.0” and “Crazy Story Pt. 3” which brought in a considerable amount of buzz and large streaming numbers for the 25-year-old rapper. In 2019, King Von debuted at No. 75 on the Billboard 200 chart thanks to his first full-length album Grandson, Vol. 1. The album showcased King Von’s vivid storytelling skills on tracks like “Went Silly” and “What It’s Like” while painting a compelling portrait of King Von’s life in Chicago. 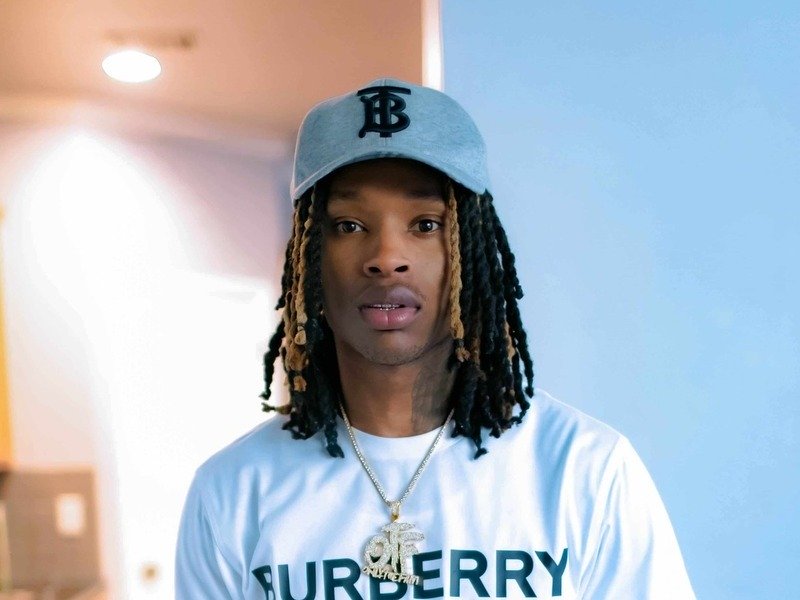 After a successful 2019, King Von continued putting in the work needed to elevate his career by releasing more singles, and before long, Billboard gave him a spot on their 15 Hip Hop & R&B Artists To Watch In 2020. “I’m not struggling with shit. This shit has been smooth for me,” he says confidently.

For his latest project, Levon James, King Von is establishing himself as one of the promising young rappers in the game with his captivating narratives and gritty, street rhymes. The 16-track project is an assortment of drill heavy beats with features by Lil Durk, G Herbo, NLE Choppa, Yungeen Ace, Tee Grizzley, YNW Melly and Booka600.

Like the dominance LeBron James showed on the court early in his career, King Von asserts his skill with the pen on tracks like “Broke Opps,” “3 A.M.,” “Something Else,” and more. “I’ve told all my stories. I’m just going to keep on rapping,” he says about his approach for the project. “There’s nothing really more to tell besides going crazy and not giving up on any of this.”

HipHopDX continued the conversation with King Von backstage at the PTSD Tour to talk about Levon James, how he developed his storytelling skills, the most important advice Lil Durk has given him, and how many years he has left as a rapper.

HipHopDX: What was it like growing up in Chicago and how did that contribute to your artistry?

King Von: Chicago in itself is fucked up, you feel what I’m saying? For me it was decent, I had my momma with me that made sure I was straight out there. I lost my daddy when I was like 10 and he was in and out of jail. But you know, when you have your momma out there you know you going to be good. You outside and shit, Chicago is an outside place. It’s the city, but I’m outside with my homies and shit. We were getting in trouble and going to school you know shit like that. I didn’t have money like that but it was decent. I had clothes on my back and a car.

HipHopDX: Who are some of the rappers who inspired you to pursue Hip Hop?

King Von: Kanye West was the only one popping out there and Twista was one of them too. But I was a Lil Wayne and Gucci Mane type of fan you know what I’m saying? Sosa started rapping, then Durk started rapping.

King Von: That shit just came to me. I don’t even know what I was really doing to develop my storytelling. I was just doing it from the ground up you feel what I’m saying? But now it’s a whole little movement where I have to put a story on to the shit like I’m the one telling the story you know what I’m saying?

HipHopDX: I know you consider Lil Durk one of your mentors. What’s the most important piece of advice Lil Durk has given you?

King Von: Durk is my boy. I’ve been fucking with Durk for a minute. We from the same hood that’s really my boy. That’s the first person, him and my homie Duke, I told them I’m going to start rapping and shit. Durk told me whatever I do I have to go all the way with that shit. If I’m going to do this shit I have to do that shit for real. That’s what he told me.

Durk goes crazy in the studio too. The thing with him he’ll make a whole lot of songs quick as hell. Songs that will probably take me a while to do he’ll get done in a matter of minutes. He make that shit so quick and Durk is the vibe so the way he gets to going crazy he has you going crazy. I go crazy off of him.

HipHopDX: What’s the main goal that you want to achieve for yourself in Hip Hop?

HipHopDX: Did you think you could’ve predicted the recognition you got on your debut mixtape Grandson, Vol 1?

King Von: Nah I didn’t predict any of this. I didn’t know rap would bring all this. It’s like I’m living somebody’s dream because it’s definitely not my dream. I’m living that shit and doing it right.

HipHopDX: How did Levon James come together?

King Von: I don’t know when I thought about making the project. It’s just that I had done Grandson, Vol 1 and it was like what was next, and I knew I had to keep going. The name came about from me just thinking of a bunch of nicknames and tweaking shit. I thought of shit like Vonald Trump, Vonald Schwarzenegger and all this other funny shit but Levon James I like that one and it just stuck with me.

HipHopDX: What was something you did for this project to elevate it?

King Von: Shit, I’m just going harder than I ever did before. I’m learning and practice makes perfect, you guys know how I do. All this shit is going to be hard but it’s just that there are more eyes on me now. Now they’re seeing and catching on to what I’m doing. People like to catch on late these days and you know how that goes. I got to put that shit in a muthafuckas face. When it’s in their face they can’t do much but face it. It’s always been the same hard shit. It was hard yesterday, today and it’s going to be hard tomorrow.

HipHopDX: What’s your favorite track on it?

King Von: I got a few of them on there. I fuck with “Block” and “Trust Issues” with Yungeen Ace. Me, Durk and Booka600 went crazy on “Baguette’s.” The song “3 A.M.” that I did by myself that bitch goes hard too. “Took It To The O” blew up so fast [laughs] and that “Broke Opps” go crazy too. Man, all that shit rock hard.

HipHopDX: Where do you go from here?

King Von: There’s nowhere else to go besides up unless you’re planning on falling off. I’m not going to lie, I’m trying to find the shit that’s going to take me there. I’m blessed with all this shit right now. This is decent but the way it’s looking I’m going up some more.

HipHopDX: Do you see yourself having a long future in Hip Hop or would you like to branch out into other ventures?

King Von: Nah I should have enough money by then. By that time I shouldn’t be talking to anybody or doing any interviews about nothing. I’m just not going to want to talk I’m going to be chilling. I’m giving myself 10 years in this. I’m actually trying to do this for five because I’m too raw to just do it in 10. Then I’m going to move on to real estate and just owning everything around you. Everything you see I’m going to own just so I can kick a muthafucka out [laughs]. But right now I’m just trying to go up with all this.

Follow King Von on his Instagram page @kingvonfrmdao and stream his new projett Levon James down below.