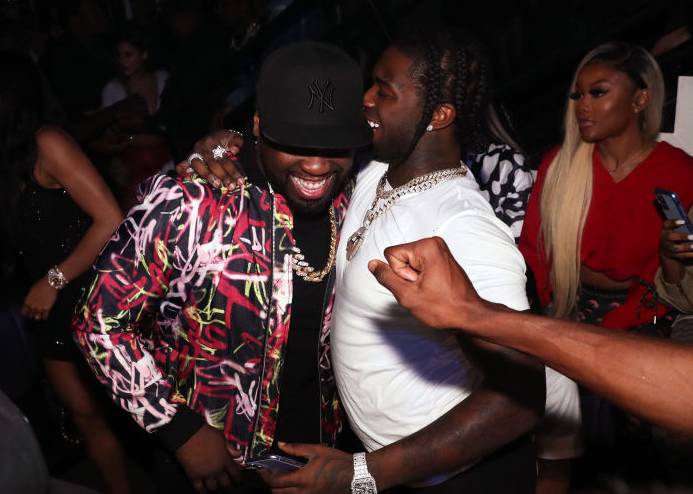 50 Cent Vows To Fulfill Pop Smoke's Wish To His Mother

Since announcing his plans to executive produce recently murdered Brooklyn rapper Pop Smoke’s posthumous album, 50 Cent has been on an earnest campaign to bring the late artists project to life.

i’m on the move listening to Pop smoke, i decided i’m gonna executive produce and finish his album for him.#abcforlife #starzgettheapp #lecheminduroi #bransoncognac

Now, it appears he intends to carry out yet another dream of the Canarsie native as he promises to fulfill Pop Smoke’s wishes of taking his mother to an award show.

In a video posted to his Instagram on Friday (March 6), 50 shared a clip from the rapper’s packed out funeral procession with an endearing message.

“He told his mom he wanted to take her to an award show. So I am going to make sure his album gets her there,” the post’s caption read.

?R.I.P Pop Smoke ?he told his mom, he wanted to take her to a award show. So i’m gonna make sure his album gets her there. ?? #abcforlife #Theking?#bransoncognac

It would seem as though 50 has made quite some progress in his pursuit to complete the Meet The Woo 2 rapper’s album after recently teasing a May release date in a post.

“See, I got Roddy Ricch on deck, this shit gonna be stupid. @champagnepapi [Drake] where you at nigga, don’t start acting light skinned on us,” 50 wrote in a post.

see i got @roddyricch on deck, this shit gonna be stupid ?‍♂️ @champagnepapi where you at nigga, don’t start acting light skinned on us.?? #abcforlife #starzgettheapp #lecheminduroi #bransoncognac

yo nigga im a need you on this record, ?but what da fuck you do to your hair blood.LOL @chrisbrownofficial #abcforlife #starzgettheapp ?#Theking ?#bransonsbrown