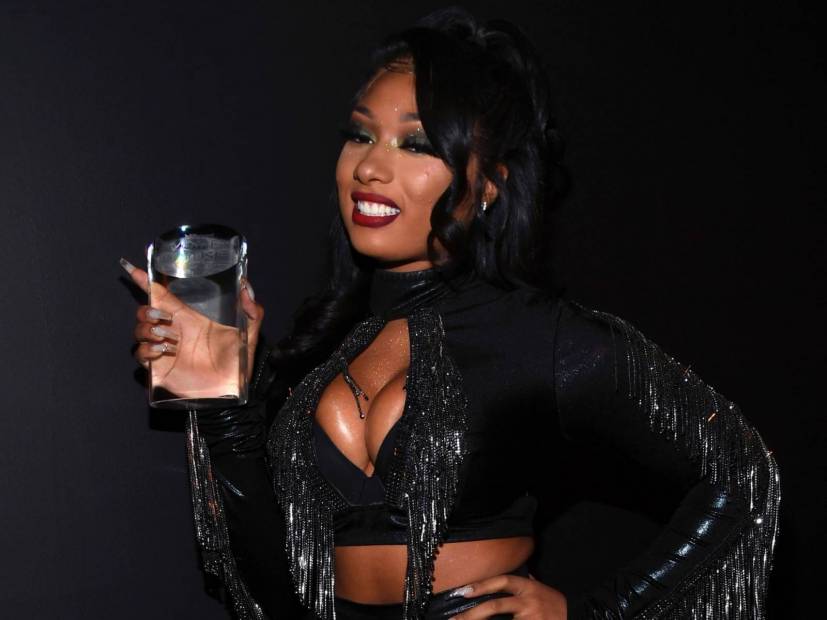 Twitter is exploding with speculation after G-Eazy shared a video clip of himself kissing Megan Thee Stallion at the Maxim Big Game Experience bash late Saturday night (February 1) in Miami.

In the clip, the “Hot Girl” rapper’s leg is draped over G-Eazy’s waist as he kisses her cheek multiple times and she stares into the camera, smiling.

Are you here for Megan G. Stallion? ? pic.twitter.com/LxkvXnkXUK

In the wee hours of Monday morning (February 3), Mr. Gerald Earl Gillum shared a photo of Megan, wearing the same outfit from the video, and coupled it with four blue heart emojis, sending Twitter into a frenzy.

In fact, “Megan” quickly became a trending Twitter topic as fans scrambled to figure out if they are actually dating, a simple collaboration is in the works or if they were just out having a good time.

“I don’t know if they are dating or not,” a source close to G-Eazy told Page Six. “They happened to be at the same party — he’s very good looking and she’s smoking hot.”

G-Eazy was previously linked to pop princess du jour Halsey who was seen at the same party entangled in a conversation with The Chainsmokers’ Drew Taggart.

Whatever the case, Twitter is having a field day with the possibility of G-Eazy and Meg dating.

Check out some of the best memes below.

hot girl summer? more like a hot girl bummer that you’re not with me. what’s good Megan my name’s G-Eazy pic.twitter.com/EBXqh3Hmcd

G-Eazy after hooking up with Megan Thee Stallion ? pic.twitter.com/sfTo3Htp9e

Somebody said this Megan And G easy and i literally haven’t stopped laughing for 10 min pic.twitter.com/O9zDsMoAlL

Megan the Stallion instructing the hot gyals how to bag a rich white dude just in time for V day ?????????????pic.twitter.com/THN5F0rvR2

g-eazy on his way to the studio after cuddling with megan thee stallion all night pic.twitter.com/k1w1zYDDH6

I don’t care that Megan is with a white man but G-Eazy? Gerald-Eazy?! pic.twitter.com/QLIMeMGBvS

This is how upset niggas are that G Eazy fucking Megan ? pic.twitter.com/x8lntEASqR

All I could think of when I watched that video of Megan and G eazy pic.twitter.com/jKVnoGOQIB

How Megan got G Easy feeling for the rest of #BlackHistoryMonth pic.twitter.com/8ceDFKS3dW

All the mfs named Gerald after seeing G Eazy with Meganpic.twitter.com/CPfvV4nsC4

bruh i woke up to a world where Megan the Stallion and G Eazy are a thing pic.twitter.com/mpkd5jaX63

G Eazy after waking up next to Megan…. pic.twitter.com/RSxwDOkEjt

LOOOOOL a man said this is g eazy texting Megan thee Stallion in the morning ?????? pic.twitter.com/N2fAVwfyCP