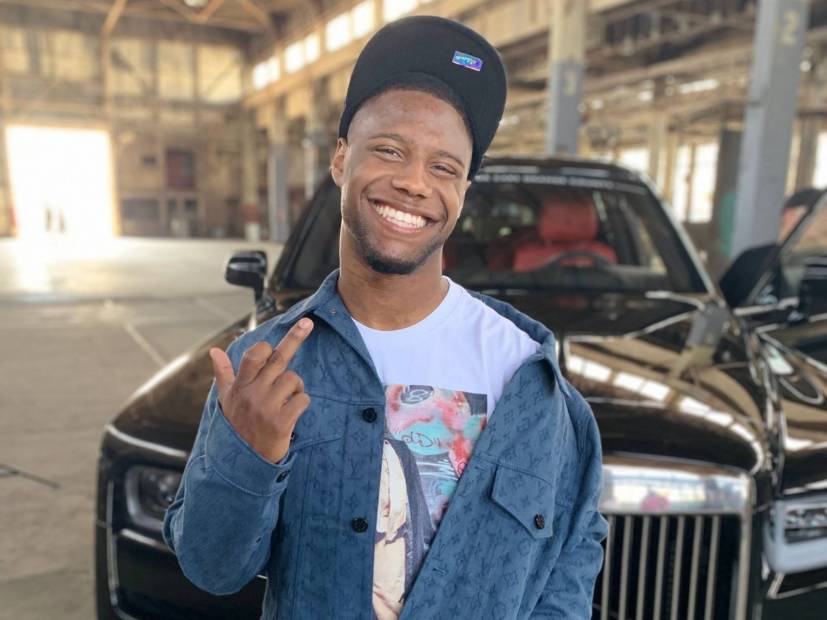 Compton’s 1TakeJay has risen up the ranks following his SoundCloud rap beginnings. Since the release of 1TakeBoyz’s debut mixtape 1TakeMovement in 2014, Jay has delivered solo efforts such as 2019’s Over Like October EP and landed major guest spots, including one on Mustard’s Perfect Ten album.

The Cali-bred rapper has positioned himself favorably as the decade comes to close, receiving more recognition beyond the West Coast and dropping his G.O.A.T. mixtape to wrap up the year.

HipHopDX caught up with 1TakeJay in the midst of his pop-up at The Hundreds flagship store in Los Angeles and discussed a range of topics including his latest mixtape, his musical reach and much more.

HipHopDX: What was the motivation behind releasing the G.O.A.T. project?

1TakeJay: It’s like, I’d call it a mixtape. Just a body of work to just get out there for the fans but still let ’em know what’s going on — it ain’t no bullshit. But yeah, album for sure coming later.

HipHopDX: Can you describe to us your intentions behind the title for the project. What does it mean to you?

1TakeJay: Of course when everybody sees G.O.A.T., they gone think greatest of all time, but I’m going to let ’em think what they want because you know people going to be talking shit like, ‘Oh he ain’t no great’ this and that. So just to get people talking, just lowkey strategic. And then, it don’t mean that at all, so I’m going to put out the meaning like a little later. But to give people a hint, my music is fun and mostly about girls; like girls like to dance. I like to talk about girls a lot because girls like to dance to my shit, so it’s female inspired for sure.

HipHopDX: And that female inspiration definitely shows on tracks like “Hello” and “I Like Bitches,” which are two of your more popular songs right now. I wanted to ask a little about those tracks specifically and how you feel they represent your unique style?

1TakeJay: I feel like it’s just genuine. Really, my music is like how I talk on the daily so it just naturally comes out like that — like the slang, I guess the shit-talking. I don’t even call it rap, I call it “shit-talking” music but in a fun way. And I really focus on beat selection, I’m really hands-on. Like that beat (“Hello”), I orchestrated it. I didn’t make the beat, but I sit down with the producer and tell them exactly how I want it. And I don’t know, really the beat will give me the vibe of what the song is going to be about really. I just start putting together thoughts in my head and then just go from there.

HipHopDX: Two tracks that really stood out were “Arco 2” and “Fucked Up.” Can you share a little bit about why you felt like it was important to include these records?

1TakeJay: Really, I made it about five months ago and then when I first made [“Fucked Up”], I was just telling my producer — like typically I do more like West Coast beats, turnt up, higher BPM. But I wanted to do kind of like a trap sound because I’m a wild ass person, so I wanted to bring that to life. And then shit, I heard the beat and then really that’s the first thing I thought, just a vibe. Because I like getting in mosh pits and shit like that, so that was really where that vibe came from.

1TakeJay: Aye! I’m all around. You feel me? I could steal a nigga’s girl or you can catch me in the moshpit.

HipHopDX: I think it’s interesting that you say that because you are truly all around. I know you are from the Westside of the city, but what’s it like being able to tap in with rappers from all over like Blueface or Shoreline Mafia or FrostyDaSnowmann or AzChike?

HipHopDX: How did you end up on the intro to the Perfect Ten album? Did you two already know Mustard?

1TakeJay: We had made music before prior to that, it just hadn’t dropped yet. He really just texted me the beat and was like, “Yo, you fuck with this?” And I was like, “Oh yeah, that shit is hard.” And he told me to write something to it and was like, “how long is it going to take you, like a couple of days?” and I was like, “Nah, I’ll have that shit done like tonight.” I did that shit quick, pulled up the next day, we recorded that shit, and we just knew. Like first, when I pulled up on him, I rapped it. I didn’t record it, I just rapped it first and everybody was fucking with it like, “Yeah that shit hard!” — and then we recorded it and was just fucking with it even more.

HipHopDX: How did it come together with the exclusive album merch collaboration with The Hundreds?

1TakeJay: Growing up, I always wore The Hundreds, so that was really kind of dope. It really started from them just like fucking with me like — you know brands reach out to artists or influencers or people with a following just to fuck with the brand. It really was just like, “Come down to the store, we fuck with your movement, we gone give you some gear and shit.” And then they gave me shit, and then they just been fucking with me ever since.

But it just came up naturally from them fucking with me and me fucking with them since I was young. Like why not? I already wear the brand — I feel like that’s hella dope, I would have never thought no shit like that. I’m coming in here buying they shirts when I’m a little and then now to collab with them on some shit.